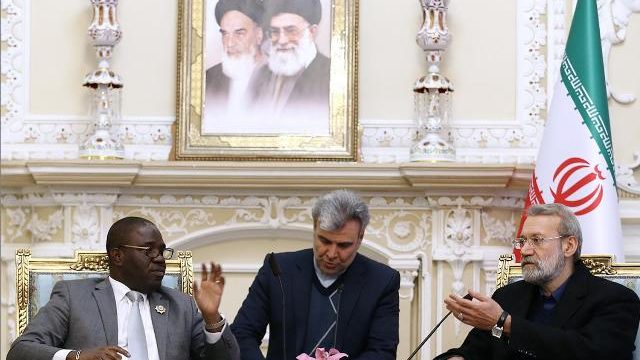 IRNA – Majlis (parliament) Speaker Ali Larijani said on Saturday that Iran intends to expand its ties with African states, so it is following up useful consultations in this concern.

He made the remarks in a meeting with Ivory Coast parliament Vice-Speaker Perwatt Oula.

Given the problems which the Islamic states are facing, it is necessary that the conference takes firm and clear stance on important issues such as terrorism, Palestine and Myanmar.

Larijani said that the conference is an appropriate opportunity for participating countries to discuss expansion of bilateral ties.

Oula, for his part, said that Ivory Coast is to support Iran’s stances in this conference, because the two countries have common points of view on Islamic world issues.

He also conveyed greetings of parliament speaker to his Iranian counterpart and invited Larijani to pay visit to Ivory Coast.

The MP called for expansion of economic, trade and parliamentary relations between the two countries.

The 13th Conference of Parliamentary Union of OIC member-states (PUIC) is to kick off on Tuesday and continues on Wednesday in Tehran.