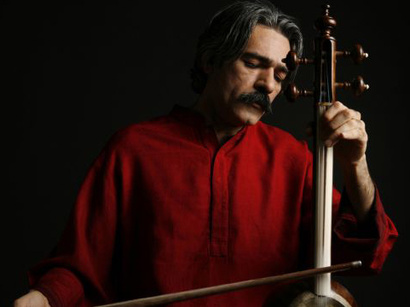 Born in 1963 to a Kurdish family in the Western Iranian city of Kermanshah, Kalhor started learning music at the age of five and began his professional activity at the local broadcasting organization of his hometown when he was 13 years old.

He traveled to different parts of Iran to study the Persian traditional melodic figures, radif, under the directorship of several maestros, as well as the music of the northeastern province of Khorasan province, where music traditions have Kurdish, Turkic and Persian influences.

At the age of 17, the musical prodigy moved to Rome, Italy, and later to Ottawa, Canada, to study European classical music at Carleton University.

“Musicians, music experts, and musicologists should be au fait with mathematics, history, and literature,” Kalhor has said, in words that echo the profundity of his musical expertise.

Kalhor, who is famous for creating a unique mixture of classical Persian music with folk tunes of the Kurdistan region in western Iran, has played alongside the famous Iranian vocalists Mohammad Reza Shajarian and Shahram Nazeri.

He has also performed in many countries and alongside many world-renowned musicians and ensembles such as the string quartet, Brooklyn Rider, Indian Sitar player Shujaat Husain Khan, Indian Tabla player Swapan Chaudhuri, with whom he formed the group Ghazal and Turkish baglama maestro Erdal Erzincan.

Kalhor is specifically famous for his brilliant performances on the traditional string instrument.

“As I grow with Kamancheh, this love for that kind of sound grows more and more as I age. It is a very special and soulful sound for me as I go through different stages in my life,” he said in a documentary about his artistic life, Songs of Hope.

Kamancheh is a string instrument played by drawing a bow along its four metal strings. The instrument dates back to the 9th century and it is considered an ancestor to the European violin family.

In December 2017, UNESCO added Kamancheh to its list of Intangible Cultural Heritage for Iran.

The multinational band, led by fêted French-born Chinese-American cellist Yo-Yo Ma, serves to intermingle world’s sundry musical styles as a means of sending across an eclectic and intertwined cultural message.

The band won the accolade for its “Sing Me Home” album. The ensemble’s website called the work a “tribute to the ways culture can help us encounter, connect, and build something new.”

Kalhor is the first Iranian who received the Grammy Award and he is the only Iranian musician to have been nominated to receive the award four times for his works, including two previous World Village releases, Faryad and Without You.

In an interview with Iran newspaper last year, Kalhor rejected the idea of “world music” in which a prominent maestro brings together a team of musicians from different parts of the world, but have them perform within the framework of his or her own thoughts without using the diverse cultural potentials of other musicians in the team.

He noted that the global music should go beyond the comfort zone of the composer and encompass a mixture of several cultures.

Most of Kalhor’s solo performances are improvised and he appears on the stage without planning the show beforehand.

“What I do usually in my solo concerts is that I start from somewhere and I depart from that point and I try to make a progress. What comes next I cannot control. It is not up to you to decide. Sometimes, you want to go to a direction when you think about it before the show, but it never happens. My record on that is hundred percent. You just go as your imagination takes you,” he says.

The music maestro has been devoting efforts to organize free concerts for the public and he expresses hope to make that happen in a number of disadvantaged Iranian cities in the future.

“Music belongs to the people. It is performed for the people. All concerts should be for free… we have talked with [officials of] two or three cities and they welcomed the idea,” he said.

Kalhor views culture as a strong tool to bring about social reforms and educate the public.

“Culture in general educates and enlightens the people, makes them more familiar with their rights… [and asks them not] to settle for less, while they can settle for more,” he says.