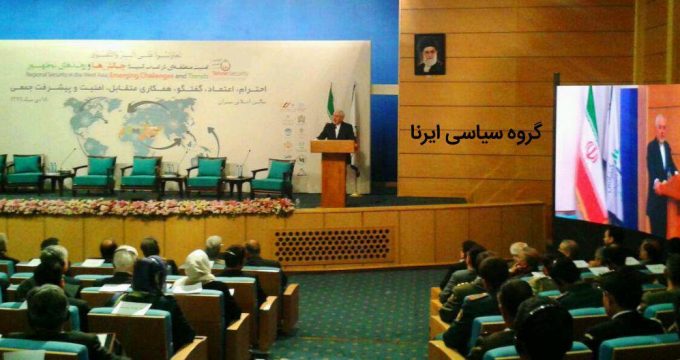 The day-long security conference on West Asia region’s security challenges and trends was attended by more than 200 Iranian and international political figures.

Addressing the meeting, Zarif stressed the necessity of “precluding the spreading of extremism into new areas.”

“The Second Tehran Security Conference is held at a time when West Asia is going through one of its most difficult times. Violent extremism, which embroiled our region in one of its most tumultuous periods of its history, is on decline,” he added.

“Daesh, as the most petrifying representative of this scourge, is militarily suppressed, its self-proclaimed and false Caliphate destroyed and the territory under its control, occupied through boundless violence and terror, liberated,” Zarif noted.

Eventually the final statement issued by the Tehran Security Conference, the participants stress that foreign intervention has not brought about security in West Asia region, cautioning the region’s security cannot be imported from outside.

At the end of the gathering, a number of foreign officials attending a conference including Oman’s Minister Responsible for Foreign Affairs Yusuf bin Alawi bin Abdullah, Massimo D’Alema, Italy’s former prime minister and minister of foreign affairs held meetings with Zarif for talks on the regional and international issues.

The meeting between Zarif and his Omani counterpart, reportedly revolved around the critical conditions in Yemen, the need to end the war and aggression against Yemenis, and the ways to deliver humanitarian relief aid to the nation buckling under a Saudi-led military campaign and blockade.

Zarif and bin Alawi also discussed the issues of mutual interest between Tehran and Muscat, and explored avenues for the enhancement of banking ties.

Stressing the need to protect the Joint Comprehensive Plan of Action (JCPOA) – the nuclear agreement between Iran and the Group 5+1 (Russia, China, the US, Britain, France and Germany) – the visiting Italian figure urged efforts to boost economic relations between Iran and the EU.

For his part, Zarif reiterates the need for the European Union’s practical steps to save the JCPOA in addition to the verbal statements.

Zarif and D’Alema discussed the latest regional developments, including Syria and Iraq.