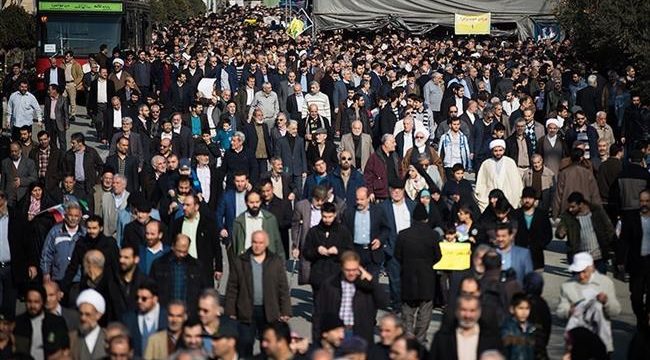 January 6, The Iran Project – For a fourth straight day Iranians from every walk of life poured into streets in various major cities nationwide on Saturday (Jan. 6) to condemn the recent riots and acts of vandalism in the country and voice their support for the Islamic Republic’s Establishment.

On Saturday, people rallied in the capital, Tehran, the cities of Sari, Amol, and Semnan in the north, Ilam in the west, and Kerman in the south. They shouted slogans and carried placards, condemning violence and sedition.

Thousands are estimated to have taken part in the demonstrations.

,On Friday, a large number of Friday prayer worshippers in satellite town on the outskirts of the metropolitan Tehran on Friday to condemn recent riots.

The Friday prayer worshippers in several cities including Shahr-e Ray, Damavand, Shahriar, Pakdasht, and Robat Karim demonstrated to renew their allegiance to the Islamic establishment and to slam the recent violent riots in the country.

This week spontaneous demonstrations were also held across Iran aimed at voicing anger at the rioters who destroyed public property and desecrated the country’s national flag amid recent unrest in a number of cities.

Participants in the rallies denounced the rioters as the stooges of the enemies or deceived individuals that sought to foment sedition by resorting to violence.

They also chanted anti-US and anti-Israeli slogans in the rallies, reaffirming commitment to the Islamic Republic and pledging support for the country’s security and stability.

Last week, a number of peaceful protests over economic problems broke out in several Iranian cities, but the gatherings turned violent when groups of participants, some of them armed, vandalized public property and launched attacks on police stations and government buildings.

Over a dozen people have been killed in the ensuing violence, according to media reports.

On Wednesday, too, Iranian people held rallies in several cities across to condemn the violence.

The participants voiced support for the Establishment and shouted slogans against the US and the Israeli regime for backing the riots.

Some Western and Arab media outlets tried to portray the recent protests as a political uprising against the Establishment.

Iranian officials maintain that people have the right to stage protests to express their opinions, as long as rallies comply with the legal conditions.