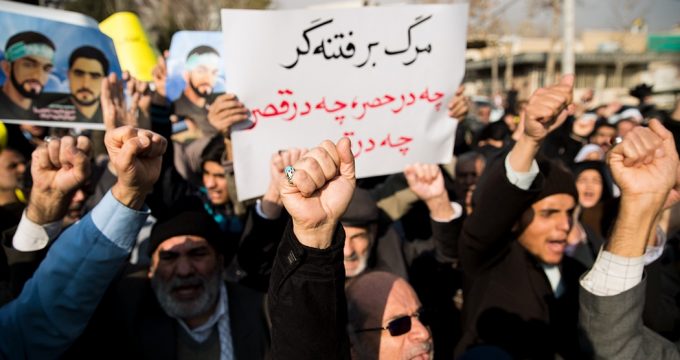 Iranians rally for third day in show of unity, strength

Press TV- People have taken to the streets in major cities across Iran for a third consecutive day to reiterate support for the Islamic establishment following scattered riots in some parts of the vast country.

Demonstrators rallied in the capital Tehran and the cities of Tabriz, Sari and Kerman to denounce violence by those who infiltrated peaceful protests to turn them into scenes of confrontation and attack on public property.

They carried national flags which had been burnt by some rioters in recent days as well as placards denouncing foreign support for the unrest as they shouted slogans against the US, Israel and Saudi Arabia.

Peaceful protests against recent price hikes and the overall economic conditions last Thursday degenerated into violent melee by certain elements who were armed at times, running amok in a few towns.

The turmoil marked rioters leading fire engines in one city into the crowd of people, killing two bystanders, and attacking a police station elsewhere.

Over a dozen people were killed in the turmoil, including police. According to officials, some of the fatalities came even as security forces did not fire a single bullet. They said some rioters used shotguns and pistols to attack police and fire at the crowd of protesters.

It also marked vociferous support expressed by US President Donald Trump and Israeli Prime Minister Benjamin Netanyahu for rioters in a spate of tweets which drew condemnation from several governments and Western media.

“A voice that speaks on behalf of Trump and Netanyahu does not belong to the [Iranian] nation,” Tehran Friday Prayers leader Seyyed Ahmad Khatami told worshipers ahead of the rallies.

The riots, he said, were financed by Saudi Arabia and planned by the United States, adding that there had been plans to send arms to the country to overthrow the Islamic establishment.

The cleric said the initial protesters were rightful and that their voice should not have got lost in the melee.

Iranian President Hassan Rouhani has said people are free to criticize and hold protests to express their views according to law, but the manner of expressing criticism must help improve Iran’s conditions.