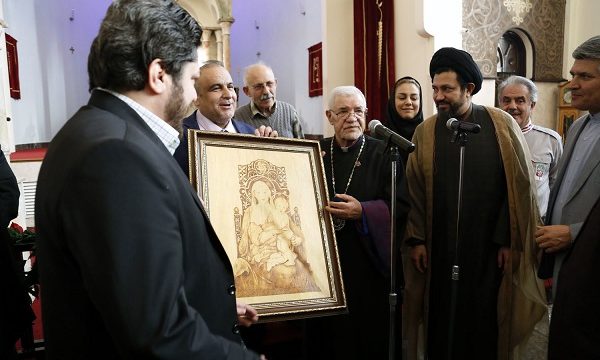 IFP – Christians and Muslims get together in Christian New Year celebrations in Iran in a show of solidarity and rapport between followers of the two religions.

A ceremony marking the beginning of the New Christian year was held in Iran, bringing together a host of high-profile Muslim and Christian officials.

The ceremony was titled “The Manifestation of Friendship and Affinity between Muslims and Christians in Iran.”

Present at the event was Archbishop Sebouh Sarkissian, who said he was pleased to see such an event was being held.

“These days when New Year celebrations are being held, it is very important to remember all human beings,” he said, according to a Farsi report by the Honar Online news agency.

He then quoted verses from the holy Bible, which says humans are all brothers, sisters and friends.

“When you pray for me, or when I pray for you, in fact we are worshipping God,” he noted.

He then condemned policies adopted by US President Donald Trump, and said his unwise decisions have pushed the world toward crisis.

He highlighted that all Christians denounce Trump’s recognition of al-Quds as Israel’s capital, and believe al-Quds is and will remain Palestine’s capital forever.

Another official who was present at the ceremony was Abdollah Hosseini, the head of the Africa Islamic Center and responsible for running the affairs of a religious group of English-speaking expats in Iran.

He said Islam and Christianity are of the same origin, and both seek love and peace.

Sheida Mahnam, a top official with the Iran-UNESCO National Commission, also urged unity among different religions. The official expressed pleasure over the solidarity created through the gathering, and congratulated all Christians on the arrival of the New Year.

Many other authorities and representatives of different groups and institutions were also present at the ceremony.