RT– The UN saves millions of lives and is responsible for global peace and security; by cutting its funding, the US made a big step in the wrong direction, Kaveh Afrasiabi, a former adviser to Iran’s nuclear negotiation team, told RT.

The US ambassador to the UN Nikki Haley has said Washington is to reduce its contributions to the UN. The organization is facing a $285 million cut over the next two years.

It is “a big step in the right direction,” Haley said on Sunday.

The US makes the largest contribution to the UN owing to the size of its economy. It’s been responsible for 22 percent of the central budget, contributing more than a billion dollars over the last two years.

The funding cuts come just days after the UN overwhelmingly voted to reject President Donald Trump’s decision to recognize Jerusalem as the Israeli capital. Only nine members, including the US, voted against the resolution, while 128 others supported it. 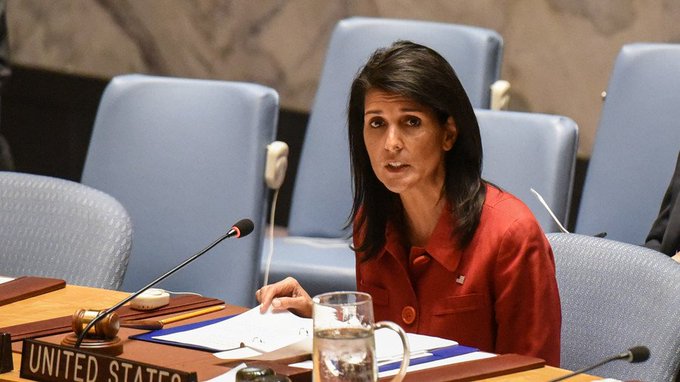 Kaveh Afrasiabi, the former adviser to Iran’s nuclear negotiation team and author of the book UN Management Reform, says there’s no doubt the move is directly linked to the vote.

“Based on the statement read by Ambassador Haley, there is no doubt that there is a direct connection between that vote, which was a total embarrassment to the US, and the retaliation that has followed in a form of a big financial stab at the UN,” he told RT.

However, he pointed out, the cuts could have been even more significant.

“There was a fear that this could be twice as bad, and on the bright side it’s not even close to what candidate Trump promised in terms of a 50 percent slash in the US’ contribution to the UN,” Afrasiabi said.

“Nevertheless, I suppose the White House’s perverse Christmas gift to the world community and a premier world organization that saves millions of lives and is responsible for global peace and security definitely is a big step in a wrong direction, contrary to what Ambassador Haley said,” he noted.

Explaining the decision, Ambassador Haley also said that “the inefficiency and overspending of the United Nations are well known. We will no longer let the generosity of the American people be taken advantage of or remain unchecked.”

Commenting on the matter, Afrasiabi said “the UN has been grappling with the issue of reform…for a long time.”

In his opinion, the US’ move is “a wrong way of approaching the problem.”

“Just about everything that Ambassador Haley has done since assuming her post has been contrary to the spirit of the UN Charter, has been quite undiplomatic, foreign to the very notion of world diplomacy, complete tactfulness and without any sense of nuance,” he said. “This kind of crude language of threat and punishment used against sovereign nations and so forth hurts the US’ image and credibility worldwide. The US is not helping itself by having someone represented at the UN, who is so undiplomatic and foreign to the spirit of the UN.”

Haley’s announcement to cut the US contribution to the UN budget “is foremost a nod to President Donald Trump’s political base,” says Colin Cavell, associate professor, Bluefield State College, author of Exporting ‘Made in America’Democracy.

“Particularly, his anti-internationalist, very pro-American, America First political base – that is very skeptical about anybody who wants to bring the world together united under international law and seek peace,” he told RT. “Trump is giving them a nod just as he did a couple of weeks ago when he decided to announce the US will move its embassy to the contested city of Jerusalem in Israel.”

Last week, ahead of the UN General Assembly emergency session, the US president had threatened to cut aid to UN member states who vote against the US on its Jerusalem decision.

According to Cavell, Haley’s announcement is “part and parcel of the punishment” that Trump said he would inflict on any nation that does not go along with the US directives.

The US has been the largest contributor to the UN budget, but, according to Cavell, “Trump’s base believes that nothing has been gotten from that.”

“They believe that cooperating with other nations, supporting international law has only worked against the interests of the US. That is why Trump is catering to their interest because his political base formed approximately a third of the US citizenry. As long as he can keep that base together and the opposition is divided, which they are very much, then he believes that he can rule in that fashion,” he said.