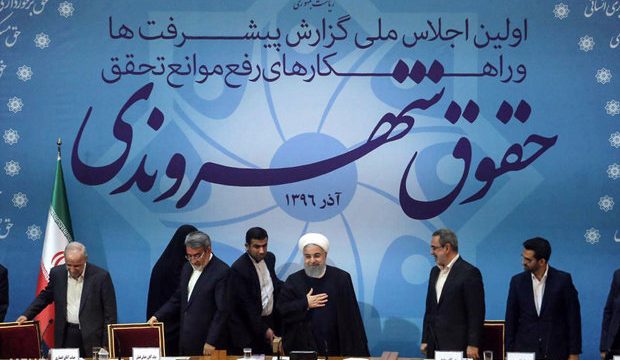 IRNA – President Hassan Rouhani said on Tuesday that free access to information and cyberspace are among the rights of the Iranian citizens.

‘Economic tranquility, interaction in foreign policy, Healthcare Reform Plan, access to cyberspace and citizenship rights had been the core of the activities of the government,’ President Rouhani said, addressing the First National Conference on Reporting the Progress and Solutions for Removing Obstacles to the Realization of Charter on Citizens’ Rights.

He reiterated that full implementation of Charter on Citizens’ Rights is his government’s goal, and said, ‘The Revolution was for people to enjoy their material, spiritual, individual and social rights.’

‘I order the Minister of Economy and also the Treasury to immediately publish the amount of budget they allocate to any organ,’ President Rouhani added.

The Iranian president reiterated that sense of justice and secured citizens’ rights are the basis for peace in the society, and said, ‘Economic tranquility, interaction in foreign policy, Healthcare Reform Plan, access to cyberspace and citizenship rights are the core of the government’s activities.’

He added, ‘We have no way other than clarity for rooting out corruption; we must all go inside a glass room so that people can see every measure we take.’

The Iranian president pointed out that 70 percent of the world’s services are carried out through the Internet and the cyberspace, and said, ‘Now irrigation is controlled through Internet facilities and we cannot go back to 50 years ago’.

‘Internet and the cyberspace have threats as well, but we must teach the society how to deal with them instead of closing it down,’ President Rouhani added.

‘We need a secure communication atmosphere, not a suppressive one in which people’s rights are violated,’ the Iranian president said, adding that phone tapping has limited legal framework and beyond that is against the law.

President Rouhani reiterated that if anybody is against the JCPOA, they must not have faith in Trump, and said, ‘Healthcare Reform Plan will continue to be here as an important citizenship right.’