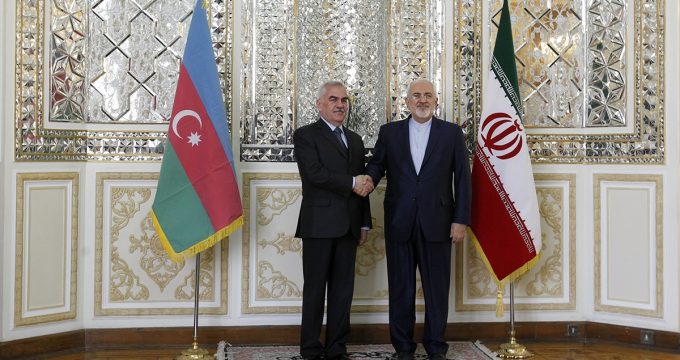 December 19, The Iran Project – Chairman of the Supreme Assembly of the Nakhchivan Autonomous Republic Vasif Talibov arrived in Tehran on Sunday (Dec. 26) to hold talks with top Iranian officials.

“The Islamic Republic of Iran is ready to develop and facilitate its relations with Nakhchivan in various fields, including agriculture, railway, road construction and infrastructure projects, energy and customs service,” Zarif added.

Talibov, for his part, expressed satisfaction at the growing bilateral interaction between Iran and Azerbaijan, particularly Nakhchivan, in diverse areas, saying, “We are ready to increase our cooperation with Iran in the fields of energy, tourism and transportation.”

Talking to Talibov, Larijani hoped that the Caspian Sea will serve as a ground for peace, calmness and extensive cooperation.

Referring to the need for further collaboration in the oil sector in the Caspian Sea region, Larijani said that suitable dialogues have been made between the Iranian and Azerbaijani presidents hoping that the waterway will serve as a ground for peace, stability and further cooperation.

Meanwhile, Talibov, for his part, said that the Nakhchivan Autonomous Republic is a state within the framework of Azerbaijan and has its own parliament and seven representatives from the autonomous republic are elected to the national assembly.

In a meeting with Karbasian, Talibov stated that electricity-gas exchange with Iran and promoting agricultural ties are among the suitable areas of bilateral cooperation.

“Nakhchivan huge energy from its hydraulic power plants in rainy seasons and it can hold talks with Iran for selling surplus energy,” Talibov noted.

Karbasian, for his part, underlined Iran’s resolve to promote ties with Nakhchivan, saying that bilateral ties has experienced a substantial boost during the presidency of Hassan Rouhani.

In addition to cooperation in the fields of trade and tourism, he added, banking, transit and industrial ties should take a more fundamental shape.