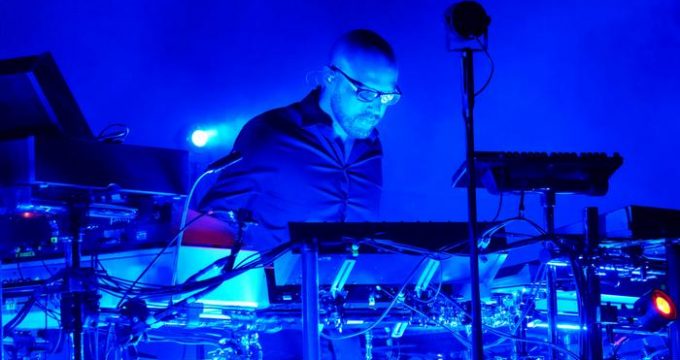 IFP- After five nights of live performance in Tehran, Christopher von Deylen, the founder and sole member of German electronic band Schiller, says he will never forget the moments on stage.

It was about one week ago when the renowned German electronic band Schiller made a rare visit to Iran and conducted a series of concerts in Tehran, which received a huge reception from its fans.

Iran is a safe country in the heart of an unstable region which is the scene of blasts, carnage, fire and smoke on a daily basis. Christopher von Deylen was so excited about being in the Iranian capital that not only recorded his moments in each part of the city but also took videos of his enthusiastic Iranian audiences during the concert.

Schiller band, named after the German poet and dramatist Friedrich Schiller (1759-1805), was formed by von Deylen and Mirko von Schlieffen in 1998. Their first single ‘Glockenspiel’ was a great success in Germany. Around 2001 or 2002, von Schlieffen left, leaving von Deylen the only permanent member. Over seven million copies of Schiller’s works have been sold across the world. According to a Farsi report by IRNA, von Deylen conducted concerts in Tehran for fivenights. He says he will never forget the moments on stage.

Some of the pieces played during the concerts were Ultramarin, Once Upon A Time, Ruhe, Berlin Moskau, Schwerelos, Polarstern, I Feel You, Sehnsuchtand Klangwelten.

The concerts were organized by Ritmeno.ir, a local music website, in collaboration with the Tehran-based cultural institutes of Nay-o-Ney and Tanin-e Roya-e Pars directed by Mehdi Kashi and Mostafa Kabiri respectively.

Each night, the concert began amid the enthusiasm of the exciting fans. Von Deylen filmed the whole concert using his own camera. He shared some clips of the concerts as well as his experiences in Tehran in his Instagram account after leaving Iran.

“I never record my audience reactions during concerts. But in Tehran, I’ve recorded Iranians’ reactions because we were shocked to see their exciting reactions. We needed the videos to explain to our friends in Germany how exciting the Iranian fans are,” he said.

Von Deylen began to dream about Iran at seven when his father made a visit to Iran. On his return, the father brought a box of Iranian pistachios. He also brought with himself sweet memories of Iran and the Iranians.

Schiller certainly advises everyone to go to the city, even if it’s not to play music. The concerts were conducted on December 11-15 which covered a selection of the memorable hits created by the band.

On his feeling towards Iran, von Deylen said, “I’ve got a good feeling. We had come to Iran some 10 years ago, when we visited Tabriz (capital of East Azarbaijan Province), Isfahan (capital of Isfahan Province) and Tehran. All members have this good feeling. We’re eager to see how people will receive our concerts. I’ve always believed that when you compose a poem or a musical piece, you can take it around the world and share it with all people.”

“Go there! Go there even without a concert,” he said, adding that concerned messages from his friends and family before he traveled were overblown.

“I got a lot of messages asking me to be careful and, ‘I hope you will be safe and please come back in one piece and please don’t let them hang you’,” he said.