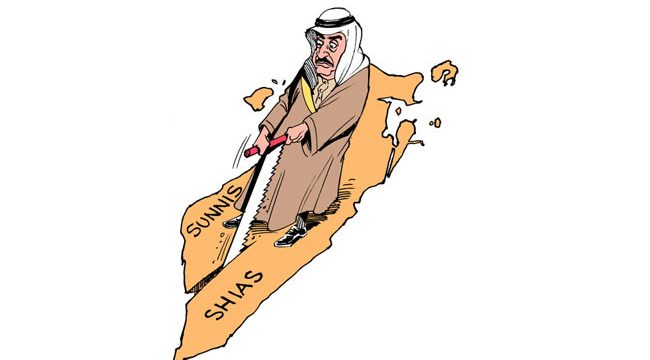 The butterfly effect and the Shia-Sunni conflict!

American Herald Tribune | LEILA FAWAZ: Who knew that a minor sports injury that took place in the year 1940 would be the cause of a chain reaction that led to John F. Kennedy’s assassination 23 years later? This is a perfect example of what we call “The Butterfly Effect”. The butterfly effect states that any minute change in a system could have a drastic impact on the whole system even years and years later.

Let’s travel back in time for a moment; it all began when John F. Kennedy was riding with his wife Jacqueline in a car and to his misfortune, he was aimed at twice; the first shot missed and the second went right through while he was trying to duck down as the shot headed towards him. Could there have been a completely different scenario where John would have survived the second shot and the plot exposed?

Maybe! But what I am certain of is that when he was trying to duck down that day, he had a hard time doing it because of his sport injury in 1940 that caused him to wear a back brace till the day of his assassination. Had it not been for the back brace, John F. Kennedy would have been able to duck down avoiding the second shot; a simple minor event that caused a drastic impact years later.

This story opens our eyes to many unfortunate events that are currently happening in the world that were the result of a chain reaction starting from a simple religious story that was spread. The problem with the world today is that it is easier for them to blame others on what is happening to them because they perceive things from the outside instead of doing that from within. If we just do some introspection every now and then, we will all realize how the simple “religious” stories we are spreading every day are sending the wrong message and causing havoc on this planet.

One of the significant reasons that the majority fail to realize behind the Shia-Sunni conflict is the extremism that is spread from both sides. For example, some Shia extremists claim that Abou Baker and Mou’awiya’s descendants till this day are from “Al Shajara Al Mal’ouna” meaning the “Cursed Blood Line”. This by itself is the worst message you can ever send to a Sunni and it is one of the many examples that are feeding extremism and causing chaos in the world. On the other hand, some Sunni extremists are also sending the wrong message to the Shia when they claim that the Shia are trying to take over the world through Imam Al Mahdi; Imam Al Mahdi is the last descendant of Prophet Mohammad (PBUH) who will come in the last days to fight a person called “Al Sufyani” and whom unfortunately some Shia extremists associate him with being a Sunni and again from the “cursed blood line”! Well news flash?! Imam Al Mahdi will not save the Shia, he will save the oppressed regardless of whom they might be and he is not a Shia, he is a man of God. Also, Al Sufyani is not a Sunni, he is just some random ignorant man who is probably just like ISIS claiming he has a religion when in reality he does not.

It is these stories and misinterpretations that are feeding extremism behind the scenes. These simple stories that were out in the public years ago have caused a major conflict between the Shia and the Sunna around the world whether you are aware of that or not. And this is also another perfect example of what we call “The Butterfly Effect”. Prophet Mohammad (PBUH) clearly stated that if you have nothing nice to say then remain silent and yet some extremists still feel the urge to spread the “cursed bloodline” philosophy and cause a massive war between the two sects. We need to stop judging people based on who their ancestors were and we need to stop spreading these judgmental philosophies.

Now let’s do some contemplation! Have you ever wondered what the difference between a gun and a tongue is? Well, that’s simple! Guns are usually made of an alloy of copper, tin and zinc where they’re like 88% copper, 8-10% tin and 2-4% zinc. Pretty rough, aren’t they? And tongues, on the other hand, are made of a group of tissues covered with a moist, and pink tissue that is “logically” way smoother and cuter than a GUN!

Unfortunately, appearances can be way deceiving as the current events have showed that we probably need to focus on having a tongue control not a gun control. Before running around and wasting our energies on achieving gun control, we need to watch out for that little pink cutie in there that’s blurting out trashy things every now and then and causing chaos around us!

The moment we start rising into a state of awareness is the moment we will all create a new butterfly effect that will pave the way for a united future where peace and harmony shall prevail. Spread peace, spread harmony and spread unity as we all have the same Lord.