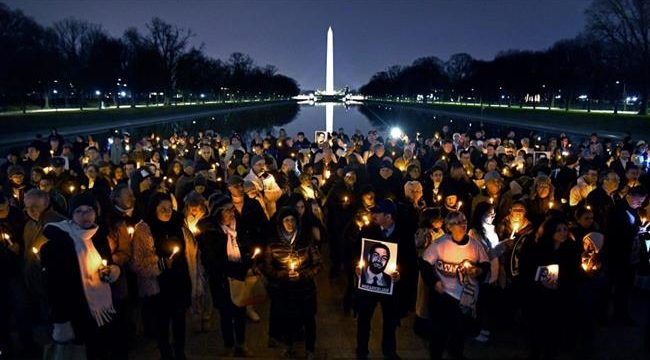 Vigil held for Iranian-American man fatally shot by US police

Press TV – Hundreds of people have held a vigil in Washington, DC, to express their grief and shock over the shooting death of an Iranian-American by US police last month.

Bijan Ghaisar, 25, an accountant from McLean, Virginia, died after being shot three times by US Park Police while driving on the George Washington Parkway on November 17.

Ghaisar was an American-born citizen of Iranian heritage.

Several speakers at Thursday’s vigil on the National Mall expressed anger over what happened to the Virginia Commonwealth University graduate.

Negeen Ghaisar fought back tears while remembering her brother. “Growing up with ‘Bij’ as my sibling was the greatest gift of my life,” she said.

Ghaisar’s father, James Ghaisar, said his son’s big heart left the world a better place for everyone. “Although his life was unjustly, unfairly, untimely taken as an unarmed man, his dream of a peaceful world remains with us to fulfill.”

A vigil was also held on Thursday night in Los Angeles, California, where Ghaisar’s in-laws live. In addition, a vigil was held on Sunday at Virginia Commonwealth University in Richmond where he graduated in 2015 with a degree in accounting.

“Bijan has left a remarkable impression on us,” said college fraternity brother Jeff Caesar. “His spread of joy. The way he carried himself in groups. The ability to make others feel as though they’re part of the crowd. As though they’re loved.”

Ghaisar’s family say he was shot three times in the head after a short chase by police, and that he had no weapons in his vehicle when shot. He died 10 days later.

Iran’s High Council for Human Rights has condemned the violent act, saying, “The US government should be held accountable for the murder and answer to the world’s public opinion.”