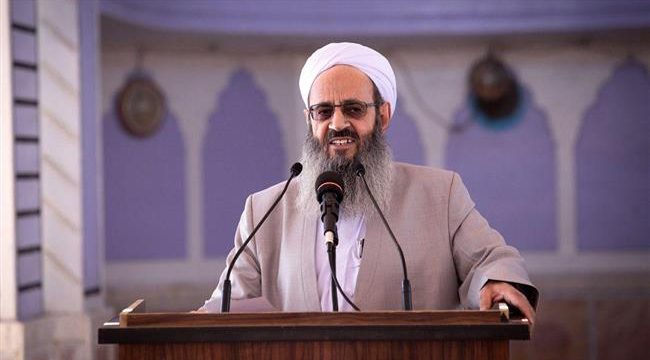 Sunni cleric calls for unity among Muslim leaders on Quds

Abdolhamid described President Trump’s decision on relocating the US embassy from Tel Aviv to Beit-ul Moqaddas as dangerous, warning the US over the consequences of it.

‘US President has explicitly mentioned that Beit-ul Moqaddas will be Israel’s capital, this is while none of the American presidents has so far dared to make such a decision,’ he said.

‘Trump’s choice is a shocking and a sinister incident since the region is not ready to face more conflicts and divisions,’ he added.

He also urged Europe, Russia and other world powers not to be silent against this decision.

‘Trump tends to change the world into a battle field,’ Abdolhamid said.

The Sunni cleric demanded all Islamic countries to set aside conflicts, saying enemies are taking advantage of the tensions to their benefits.

US president Wednesday announcement to recognize Beit-ul Moqaddas as the capital city of Israel has faced extensive criticisms all over the world even from the US allies.