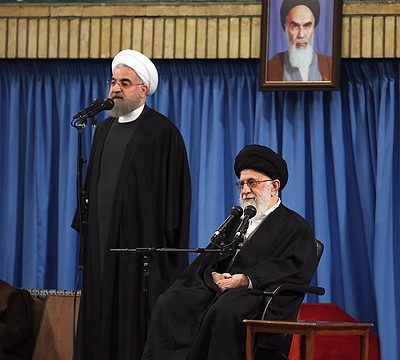 IRNA – Iran’s President Hassan Rouhani on Wednesday urged Muslim countries to resist against enemies of Islam, saying that they have targeted Al Quds in their latest aggression.

‘Prophet Mohammad (pbuh) called on the followers of every religion for a peaceful coexistence with each other,’ Rouhani said at the meeting of participants of Islamic Unity Conference with Iran’s Supreme Leader Ayatollah Seyyed Ali Khamenei.

He, who was speaking on the birth anniversary of Prophet Mohammad (pbuh), said, ‘Everybody knew that if the prophet made a deal, they would never violate it, but if other parties violated it, he would resist it with all his power.’

‘The prophet taught resistance and defense to everybody, and established security and stability in the Islamic territories of the time beside empowering people,’ Rouhani said.

‘Following the victories achieved by the nations in the region in fighting terrorists, making them fighting with one another, and disappointing the enemies of our lands step by step, the enemies are thinking of new plots,’ Rouhani said, urging people of the region to remain alert.

‘Now that they have realized terrorism has not been successful in the region, they are trying to make a new plot, by turning the region into an arsenal, selling different kinds of arms to Muslim countries, and intensifying intervention in internal affairs of the countries,’ he said.

Now the enemies are targeting the liberation of Al Quds, Iran’s president said.

‘The holy city belongs to the Muslims and Palestinians, and nobody can resist feelings and thoughts of its people; this is the latest adventure of the global arrogance in the region,’ Rouhani said.

‘Islamic Republic of Iran, has never agreed to change of regional borders, and will not tolerate the desecration of the Islamic sanctities.’

‘Muslims should unanimously resist the plot,’ he said.

President Rouhani also reminded Muslims of their responsibility for the cause of Palestine, and said the best way out of the plot is to renew their allegiance with the Prophet (pbuh) and implementing his life style, tradition and Islamic laws.