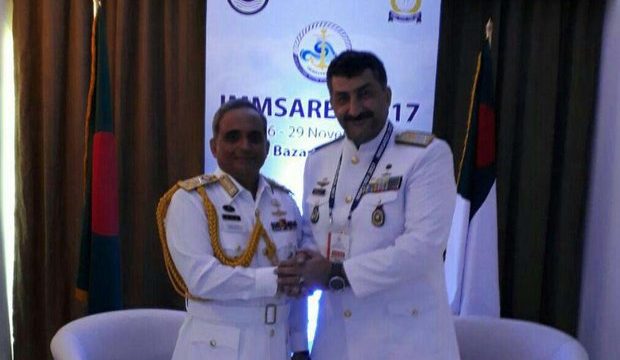 MNA – The Iranian naval delegation, who is in Bangladesh to attend International Maritime Search and Rescue Exercise (IMMSAREX), met and talked with Bangladesh navy head in Dhaka.

In the meeting, Askarian stressed on the importance of the Indian Ocean drill and Bangladeshi officials’ efforts and promised to do their best to go ahead with the planned programs during the drill.

He also thanked the people and the government of Bangladesh for helping Rohingya Muslim refugees and stated that “the Indian Ocean will be secured completely if foreign countries do not interfere in its affairs.”

Furthermore, in the meeting, Bangladeshi official hailed Iran’s presence in the naval drill and the Indian Ocean Naval Symposium.

Iran’s Navy has attended International Maritime Search and Rescue Exercise (IMMSAREX) which is currently underway in Bangladesh, under the auspices of the Indian Ocean Naval Symposium.

From Iran, Sabalan Destroyer and Bandar Abbas Naval Logistics Vessel are present at the event.