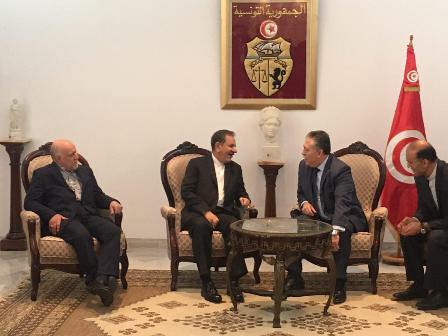 Jahangiri, stopping over in Tunisia on his way to Bolivia to participate in the fourth meeting of gas exporting countries, met with the country’s Secretary of State for Foreign Affairs, Sabri Bachtobji and the two officials discussed ways to enhance relations between Tehran Nicosia.

Iran and Tunisia should use all the existing potentials to develop their ties, Jahangiri said.

Iran is ready to share with Tunisia its scientific and technological expertise.

‘During hard times, Iran has always stood by the Tunisian government and people,’ Jahangiri said.

For his part, Bachtobji said that his country is interested to enhance its relations with Iran.

The Tunisian secretary of state for foreign affairs also called for the establishment of joint cooperation commissions between the two countries.