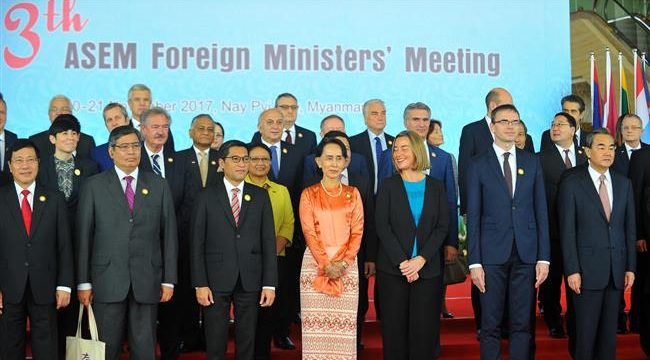 Press TV – Foreign ministers of the Asia–Europe Meeting (ASEM) have backed the multinational deal on the Iranian nuclear program, calling on all the relevant parties to honor their obligations under the international document.

The event, which was held on Monday and Tuesday, was joined by the European Union’s foreign policy director Federica Mogherini and as many as 51 foreign ministers.

In a final statement, the participants “underlined their strong support for the Joint Comprehensive Plan of Action (JCPOA)” which was inked in 2015 between Iran and the P5+1 states – the US, Russia, China, France, Britain plus Germany.

The agreement was subsequently endorsed in the form of UNSC Resolution 2231. Under the JCPOA, Iran undertook to put limits on its nuclear program in exchange for the removal of nuclear-related sanctions imposed against Tehran.

The ASEM foreign ministers also “called for the continued full implementation of the JCPOA by all sides.

Apart from the US under President Donald Trump, the deal’s signatories and the EU, which coordinated the talks leading to the accord, have stood by the deal, describing it as a triumph for diplomacy and a contributor to regional and international security.

Trump has, however, threatened to withdraw the US from the accord. He refused to “certify” Iran’s commitment to the deal last month and gave Congress 60 days to decide whether to reimpose the sanctions against Tehran.