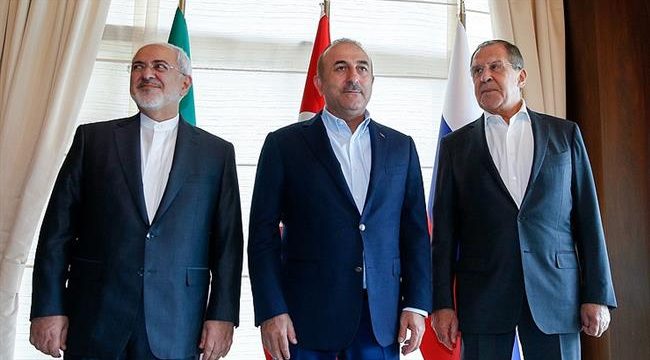 Zarif in Turkey to attend trilateral meeting on Syria

Nov 20, The Iran Project- Foreign Minister Mohammad Javad left Tehran for Turkey on November 18 at the head of a high-ranking delegation to take part in a foreign ministers meeting of Iran, Russia and Turkey on Syrian crisis.

During his one-day visit in Turkey, Zarif participated in a trilateral meeting attended by Foreign Ministers of Russia, Sergei Lavrov and Turkey, Mevlüt Çavuşoğlu on Syria crisis in Antalya and finally attended a press conference after the meeting.

Zarif and his Turkish and Russian counterparts Mevlut Cavusoglu and Sergei Lavrov, respectively, held preparatory talks ahead of Syria summit that is scheduled to be held in the Russian Black Sea resort of Sochi on November 22.

In a press briefing on outcome of his meeting, he stressed that Iran, Turkey and Russia are ready to establish means for lasting security, stability and peace in Syria, noting that the measures taken in Astana, Kazakhstan, over the past 11 months have dramatically minimized conflicts in Syria.

Talking to IRNA after a tripartite meeting in Antalya, Zarif said that certain regional states should strive for peace and stability in the region, especially in Syria, rather than waging war.

The Iranian foreign minister has criticized certain countries such as Saudi Arabia for pursuing policies aimed at sowing discord among regional states, adding that “If they change their methods, they can also be involved in [promoting] regional peace instead of warmongering [policies].”

The top diplomat pointed to great achievements made during 11 months of peace negotiations on the Syrian crisis and said, “This issue shows that if other regional countries also…take up to cooperation instead of wrong policies, beneficial results may be achieved.”

Meanwhile, Zarif also tweeted after the meeting stressing that Iran is working with Turkish and Russian counterparts to build on ceasefire achieved in Syria.

“Working with Turkish and Russian counterparts to build on ceasefire we achieved in Syria & preparing for inclusive dialogue among Syrians. Irony is KSA (Saudi Arabia) accuses Iran of destabilization, while itself fuels terrorists, wages war on Yemen, blockades Qatar & foments crisis in Lebanon,” Zarif’s twitter read.

On Nov 20, Zarif returned home from his visit to Turkey.