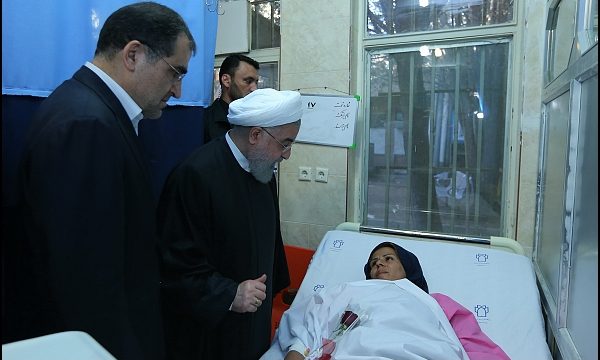 November 15, The Iran Project – Iranian aid institutions and relief workers have been working round the clock to render services to the injured and provide the survivors with their basic needs in Iran’s western regions that were hit by a deadly earthquake on Sunday night (Nov 12).

Latest reports on the 7.3 magnitude earthquake that hit Kermanshah Province said that it has so far claimed at least 432 lives and injured 9,388 others.

President Hassan Rouhani has personally traveled to Kermanshah Province on Tuesday to inspect the damage and help speed up recovery efforts, assuring the injured and those who have lost their homes and possessions that the government will stand by them and do its best to help them.

Addressing the heads of the three branches of government and several other officials,Supreme Leader of the Islamic Revolution Ayatollah Seyed Ali Khamenei ordered continued intensive assistance to the quake-stricken people in western Kermanshah Province to relieve their pains and sufferings and resolve their problems.

Jafari attended a meeting of the representatives from the organizations involved in the rescue operations, issuing the necessary orders in this regard.

The Iranian Army also has been tasked with rendering aid to urban areas, while IRGC has been asked to carry out rescue operations in rural and far-fetched areas affected by the deadly earthquake.

Soon after the news was published, the Supreme Leader also urged military and civil forces to spare no effort in giving aid to the afflicted families, adding that Army, the Islamic Revolution Guards Corps (IRGC) and Basij (Voluntary forces) to speedily help search the trapped and regulate the transfer of the injured.