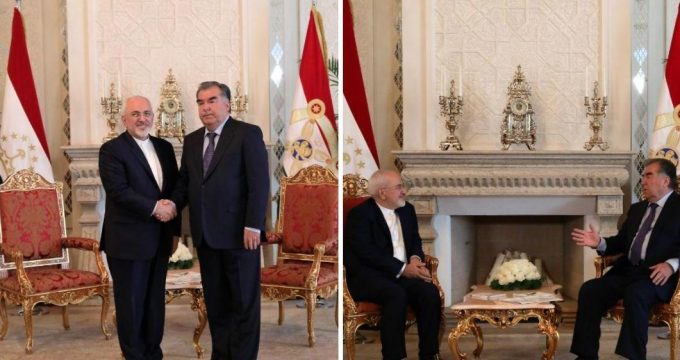 Zarif next destination was Uzbekistan where he met with senior officials and attended the International Conference on Security and Sustainable Development in Central Asia and delivered a speech in the prestigious gathering in the later country.

During his meeting with Rahmon, which lasted two hours, the two sides discussed various aspects of bilateral ties between Iran and Tajikistan, including the implementation of previously reached agreements, as well as the development of cooperation in trade, investment, energy, transport, agriculture and industry fields.

They also exchanged views on the latest regional issues, combating terrorism and extremism and cooperation within regional and international organizations.

Meanwhile Zarif and his Tajik counterpart reviewed the ways for expansion of mutual interest in the meeting.

ّIn addition to meetings with senior Uzbek officials, his stay in  the country’s city of Samarkand witnessed a speech in the international conference for security and sustainable development on Friday where Zarif said that Iran has fulfilled its commitments under the landmark nuclear deal and has proved its compliance with the principle of non-proliferation and nuclear disarmament.

“Since the independence of the Central Asian Republics, the Islamic Republic of Iran has always been a pioneer in establishing fraternal, brotherly and balanced relations based on the principles of mutual respect and interests. The strategy of the Islamic Republic of Iran is based on the development and boosting of cooperation in various fields, making efforts to establish and maintain peace and stability in the region, as well as convergence and cooperation with regional institutions and international organizations,” he added.

The Iranian foreign minister also proposed that fighting the “anti-Islam” Takfiri movement needed all-inclusive and multilateral cooperation and interaction among regional countries, besides studying the root causes of the phenomenon.