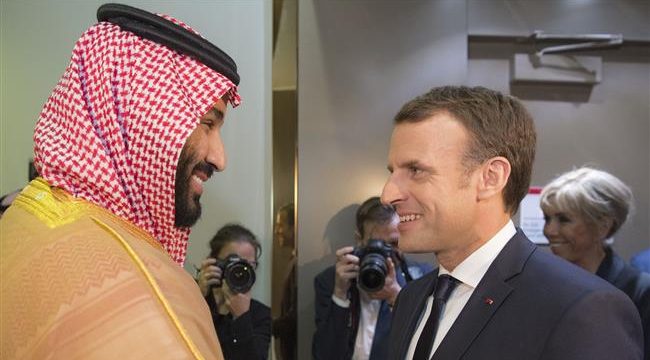 Macron in Saudi Arabia for ‘questions’ as Hariri remains in shadows

Press TV- French President Emmanuel Macron has arrived in Saudi Arabia for hastily scheduled talks with the kingdom’s leaders about a puzzling political crisis involving Lebanese Prime Minister Saad Hariri, who resigned from his job in a live broadcast from Riyadh, where he is claimed to be held against his will.

On his debut visit to the kingdom, Macron landed in Riyadh on Thursday night and met with Crown Prince Mohammed bin Salman Al Saud who welcomed him at the airport.

The French head of state announced the surprise visit at a press conference in Dubai earlier in the day, wrapping up a two-day stop in the United Arab Emirates on his debut Middle East tour.

Macron said he wanted to discuss “regional questions” with the ambitious Saudi crown prince and “emphasize the importance of Lebanese stability and integrity.”

“My wish is that all Lebanese political officials live freely in Lebanon… which means having a very demanding stance on those who could threaten any leader,” the French president said, ostensibly referring to Hariri’s claim that he could not return to Lebanon because his life was in danger there.

The Lebanese PM said in his resignation statement on Saturday that the post was no longer tenable for him due to what he called intervention by Lebanese resistant movement Hezbollah and Iran.

Lebanese officials believe Hariri is under house arrest and Saudis have forced him to resign in order to wreck his government, which is on good terms with Hezbollah and Tehran. Two anonymous US officials told Reuters that the Saudis had indeed “encouraged” Hariri to leave office.

There’s speculation that Hariri is being held among scores of princes, officials and prominent businessmen detained by the Saudi authorities in Salman’s apparent attempt to purge dissent before taking power.

A top Lebanese official calls for foreign pressure to secure the return of Hariri, who is believed to “held” in Saudi Arabia.

Macron, whose country maintains close ties with Lebanon as a former colony, admitted that he had informal contacts with Hariri but denied speculations that he was in the kingdom to negotiate the Lebanese official’s transfer to France.

Two French diplomats told Reuters that they were not aware of any plans to bring Hariri to France.

However, an unnamed Lebanese official confirmed Thursday that the country had already asked “foreign and Arab states” to return Hariri to Beirut.

In the five days that have passed since Hariri’s strange resignation, his status and whereabouts have been the subject of heated speculation.

While his closest allies in the Future Movement Party have been desperately asking for his return, Hariri’s aides say they have hardly spoken to him.

On Tuesday, a day before Macron’s visit to the UAE, Hariri was seen in the Persian Gulf country, which is also a close ally of Saudi Arabia.

According to the Emirates News Agency, there, Hariri even met with Abu Dhabi Crown Prince Mohammed bin Zayed Al Nahyan, who, strangely enough, wished the newly-resigned premier “all the success in his endeavors to ensure Lebanon overcomes its ordeals and achieves the aspirations of the Lebanese people.”

Hariri returned to Riyadh on Wednesday, according to his own office, where he met with diplomats from the United States, Britain and the European Union at his “residence.”

Interestingly, Hariri met with the French ambassador on Thursday, before Macron’s visit to Riyadh was announced.

Western diplomats, speaking on condition of anonymity, told The New York Times that all of the envoys who met the Lebanese PM came away with the impression that he could not speak freely.

Meanwhile, Saudi Arabia has urged all of its citizens to leave Lebanon, a move followed by the UAE, Kuwait and Bahrain.