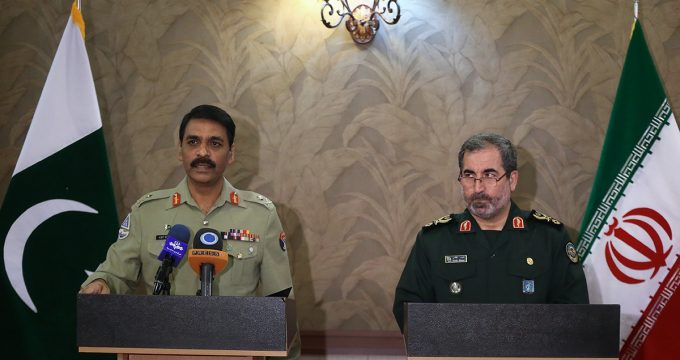 Pakistan, Iran to set up common command posts along borders

IRNA – Spokesman of Pakistan Army Major General Asif Ghafoor suggested setting up common command posts on Iranian and Pakistani borders to check the flow of terrorist groups into and out of Iran and Pakistan.

Ghafoor made the remarks in a joint press conference with Deputy Head of International Affairs Department of the General Staff of the Armed Forces Brigadier General Ghadir Nezamipour in Tehran on Tuesday.

He also said that based on the agreements reached between the army commander of Pakistan and Iran Chief of Staff of Armed forces, joint patrolling units and stations will be set up on Iranian and Pakistani borders.

Ghafoor underlined that Pakistan will never allow any measure to be taken against the Islamic Republic of Iran in its territory.

He commented on conditions on Iran-Pakistan common borders and said, ‘We declare the border as the border of peace and friendship and today, we will not feel any danger, even if having no force on the borders because we consider Iran as a friend country from which no threat threatens us.’

‘Both Iranian and Pakistani friend and allied countries should make more efforts to prevent trafficking of terrorists along our common borders in the region and one of the pivots of talks between us and Iranian military and non-military officials over the past days has been security of borders and common measures.’

Ghafoor went on to say that as commander of Pak army said in his talks, all capabilities and borders of Pakistan are open for more cooperation with the Islamic Republic of Iran and ‘we have come to the conclusion that if Pakistani army and Iranian armed forces join hands, we can fight our common enemies, that are terrorists’.

He thanked chief of staff of Iran’s armed forces for officially inviting Pakistani army commander to visit Iran and said the Pakistani official has visited Iran with the message of peace and friendship and expansion of mutual cooperation with Iran.

‘Last day’s meetings of Pakistani high-ranking military delegation with Iranian state and military officials are very constructive and professional and it was the message of Pakistani government that we will by no means lose the sincere and friendly ties and the ties having with Iran and the Pakistani delegation will leave Iran with good achievements. We hope that we will witness deepening and expansion of relations in the future.’