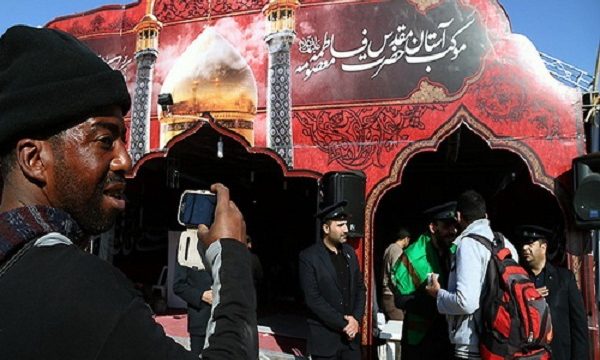 AhlulBayt News Agency- The Hazrat Masoumeh (SA) Moukeb, set up on the road between Najaf and Karbala, provides Arbaeen pilgrims with religious consultations.

Moukebs are resting places with special facilities and services for pilgrims set up on roads leading to Karbala during Arbaeen pilgrimage.

The Hazrat Masoumeh (SA) Moukeb has a special section where pilgrims can get answers to their religious questions in different languages including Arabic, Persian, English, and Urdu.

The Moukeb has been established by the Astan (custodianship) of Hazrat Masoumeh (SA) holy shrine.

During the days leading to Arbaeen, millions of pilgrims from Iraq and other countries go from Najaf to Karbala on foot.

It comes 40 days after Ashura, the martyrdom anniversary of the third Shia Imam, Imam Hussein (AS).

Each year, a huge crowd of Shias flock to Karbala, where the holy shrine of Imam Hussein (AS) is located, to perform mourning rites. Many of them also visit Imam Ali’s (AS) holy shrine in Najaf.

In the past few years, around 20 million pilgrims from all over the world took part in the mourning ceremonies in the Iraqi holy cities marking Arbaeen.