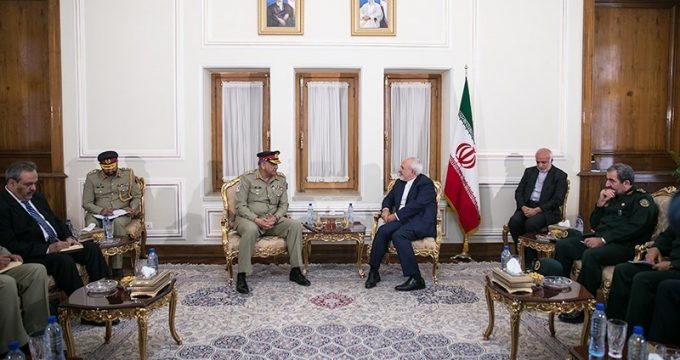 During the meeting, the two high-ranking officials also reviewed cooperation between Tehran and Islamabad on different political, economic and security issues as well as border security and fighting drug trafficking.

Zarif, for his part, underlined Iran’s preparedness to export gas and electricity to Pakistan.

They also stressed the necessity for the Islamic countries to keep vigilant against enemies’ plots to sow discord among them.

Also earlier today, Chief of Staff of Iran’s Armed Forces Major General Mohammad Hossein Baqeri and General Bajwa in a meeting in Tehran underlined the need to expand defense and military cooperation between the two countries.

During the meeting, the top Iranian and Pakistani generals underlined the need for enhanced security and defense cooperation between Tehran and Islamabad.

General Bajwa, heading a high-ranking military delegation has traveled to Tehran at the invitation of General Baqeri.

The two army chiefs stressed the need for expansion of defense and security relations aimed at resolving common issues, particularly in identifying and combating factors that cause the spread of terrorist activities along Iran and Pakistan’s shared borders.

Making optimal use of existing capacities in various international and regional communities, using the two countries’ defense and political potentials to help settle regional conflicts, and joint cooperation between the two sides free of foreign intervention were also among the topics of discussion in the Monday meeting.