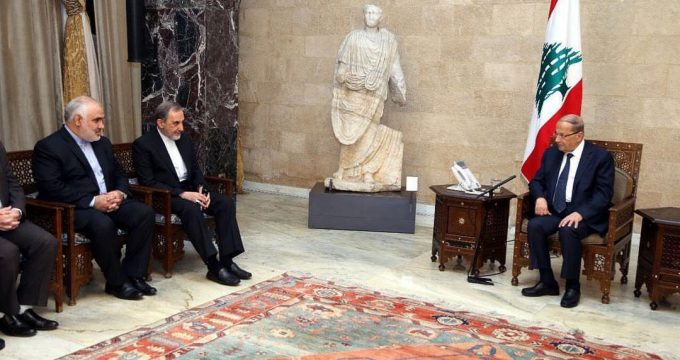 IRNA – Iran Supreme Leader’s senior advisor Ali Akbar Velayati said on Friday that Lebanese recent triumphs against the terrorist groups are the outcome of solidarity between its government and nation, indicating the competence of the country’s government.

In a meeting with Lebanese President Michel Aoun late in Beirut, Velayati explored avenues for bolstering mutual cooperation and discussed regional developments including the situation in Syria.

Velayati who serves as the senior advisor to the Iranian Leader for foreign affairs, arrived in Beirut on November 2 to attend the second International Union of Resistance Scholars meeting in Beirut (Nov 1-2).

He described President Aoun as ‘an influential character’ who has played a major role in political guidance of the country over the past year as the country’s president.

Underlining President Aoun’s role in political stability and convergence among the country’s political groups, Velayati said, ‘Lebanon is currently one of the safest countries in the region.’

The Iranian official also hailed Lebanese recent victories against Daesh terrorists saying, ‘The cohesion between the government and people of Lebanon, if not unprecedented, was rare.’

Iran is seeking bolstering ties with Lebanon, the official said, noting that Iran defends the existing diversity and plurality in Lebanon and favors success of the incumbent government.

Lebanon’s success in driving out terrorist groups have had positive consequences for the country and region, he said, calling on regional states to build peace and stability in the region through collective cooperation in all fields and prevent materialization of the US and Zionist regime’s goals in creating rift among them.

Meanwhile, President Aoun, for his part, appreciated Iran for its role in advancing regional peace and stability and underlined promotion of bilateral ties between Tehran and Beirut.