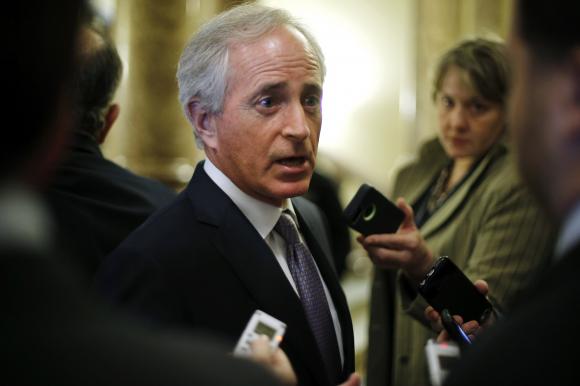 Press TV- A United States Republican Senator who has been working on anti-Iran legislation is attempting to win the partnership of a senior Democratic colleague, seemingly sidelining a junior fellow Republican known for his belligerent stance on Iran.

Senator Bob Corker (R-TN), who is the chairman of the Senate’s Foreign Relations Committee, has for over two weeks been working on an amendment to the Iran Nuclear Agreement Review Act (INARA), a law that was passed in 2015 to give the US Congress oversight on an international deal reached the same year with Iran.

Corker has partnered with a junior Senator and an Iran hawk, Tom Cotton (R-AR), to draft the amendment, which would presumably toughen the implementation of the Iran deal.

According to Reuters, the proposed amendment would restore “sanctions if Iran tests a ballistic missile able to carry a warhead or bars nuclear inspectors from any sites.”It also “would instantly reimpose, or ‘snap back’ sanctions lifted under the agreement if Iran were deemed capable of developing a nuclear weapon within a year.”

The Reuters report did not clarify whether the sanctions that the Corker-Cotton amendment would potentially restore were the nuclear-related sanctions that the US has committed to waiving under the deal. The re-imposition of those specific sanctions as long as Iran is compliant with its end of the bargain would constitute a major breach by the US.

The International Atomic Energy Agency (IAEA), which is the official institution charged with monitoring Iranian compliance with the deal, has consistently verified that compliance.

Citing the IAEA verification and other merits of the agreement, the other parties to the deal, including Europe, have said they oppose any US attempt to undermine the accord, which they say should stand. And even though not much is known about the original Corker-Cotton draft legislation, Corker seems to have concluded that it may not garner enough support at the Congress, especially among Democrats, who would not want to alienate Europe.

Politico said Senator Corker is now working with Senator Ben Cardin, a ranking Democrat of Maryland, “in the hopes of crafting a bipartisan plan.”

It said Corker’s collaboration with Cotton “has raised eyebrows among some Democrats” who believed Cotton “would pull the still-pending legislation in too hawkish of a direction.”

Democrats are wary of any legislation that would in effect sink the deal, like a re-imposition of the nuclear-related sanctions while Iran continues to be compliant.

Corker said he was taking his time to see if there was Democratic appetite for a bipartisan bill.

“There’s no rush,” Corker told reporters on Wednesday. “We’d like to see if it’s possible to have a bipartisan bill.”

He also said he was “of course” open to changes to the initial draft to get Cardin on board.

Corker and Cardin have worked together on Iran before.

When the deal was reached under the former US administration in 2015, all Republican Congress members — and a few Democratic ones, including Cardin — opposed it. But the deal survived fierce opposition at the Congress in large part because it had already become international law under a United Nations Security Council (UNCS)resolution.

The members of the Congress then resorted to crafting a bipartisan law — the INARA — to get some sort of a say in the deal’s implementation. Cardin and Corker co-wrote that law.

Corker and Cotton have drafted their amendment to the INARA in an apparent effort to address President Donald Trump’s grievances about the deal. Trump has refused to certify Iranian compliance with the deal under the INARA and said the agreement has “many serious flaws” that have to be addressed.

‘Democrats will not undermine the deal’

But since Trump’s rise to the presidency — a year after the deal had begun being implemented — many Congress members, including former opponents of the deal, have toned down their opposition to the agreement, partially because of European insistence that the deal not be undermined.

After confirming that Corker was in talks with him, Cardin said, “We won’t do anything that violates the” terms of the deal, referring to his fellow Democrats. “We have to have the understanding and support of Europe.”

Any change to the international deal would necessitate the reopening of negotiations by all parties, which Iran and most of the other sides to the agreement have said they would not do.

But while the US Congress cannot unilaterally alter the terms of the international deal, the re-imposition of US sanctions or a complete American withdrawal may indirectly affect the agreement, including by potentially complicating European trade with Iran.

Corker, too, has called on the Trump administration to accommodate European concerns.

Meanwhile, Corker is involved in a verbal tussle with Trump, which may affect cooperation between the White House and the Congress on the Iran deal and the ultimate fate of any proposed amendment to the INARA.