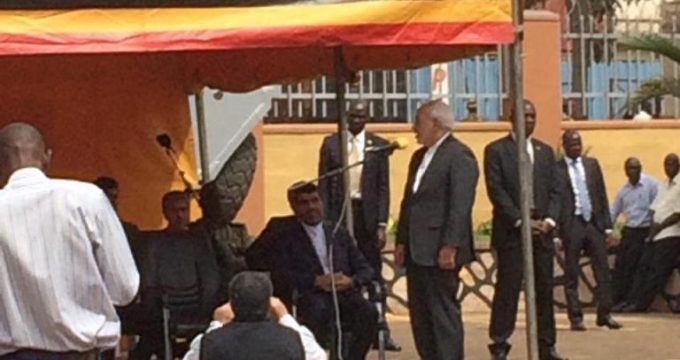 Zarif wraps up Uganda trip, off to Niger

October 26, The Iran Project – On the fourth day of his Africa tour, Iranian Foreign Minister Mohammad Javad Zarif left the Ugandan capital, Kampala, and departed for Niger at the last leg of his tour of Africa.

In Uganda on Thursday, Zarif held talks and conferred with Ugandan President Yoweri Museveni, attended the inauguration ceremony of Iran-Uganda hospital and talked to reporters at the end of his visit.

On Wednesday afternoon, Zarif conferred with Museveni on mutual cooperation and regional developments.

During the meeting, President Museveni said the two countries have plenty of capacities for development of relations.

Bilateral ties, international and regional issues and trade, economic issues were among topics of discussion during the meeting.

Meanwhile, addressing the inauguration ceremony of the joint hospital attended by Museveni and his Ugandan counterpart Sam Kutesa in Kampala on Thursday, Zarif said inauguration of Iran-Uganda hospital is considered as a turning point for expansion of all-out mutual cooperation.

Referring to Museveni’s willingness to amend bilateral relations with Iran, Zarif said Tehran is ready to expand its ties with Uganda in scientific, technological, banking, economic, trade and agricultural arenas.

Addressing the same gathering, Museveni, for his part, said that inauguration of Uganda-Iran hospital would play an effective role in developing mutual cooperation.

Ugandan president reiterated that Asian, African and Latin American countries enjoy cordial relations these days, adding that since the victory of the Islamic Revolution in 1979, Iran has cemented its relationship with the African countries, noting that Tehran enjoys cordial ties with African nations, as well.

Talking to reporters on the sidelines of the inauguration ceremony, Zarif said that Africa is an important part of Iran’s foreign policy and in it is in Iran’s heart.

He expressed happiness with his trip to Uganda and added that he was leaving for Niger.

Zarif said that the Ugandan President’s attendance at the meeting is a sign of friendship between people of Iran and Uganda.

Zarif arrived in the Ugandan capital, Kampala, on Tuesday (Oct 24) at the second leg of his tour of Africa. Prior to his Kampala visit, Zarif  traveled to Pretoria, South Africa.