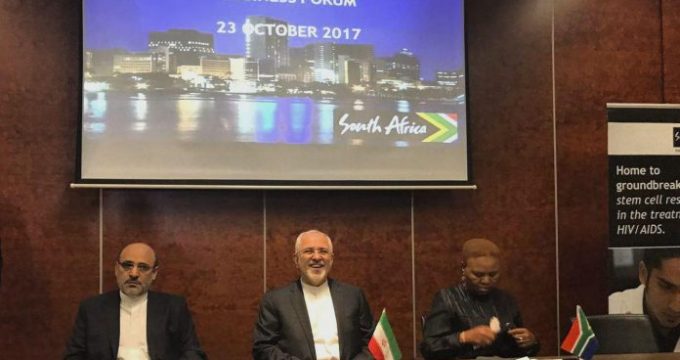 October 23, The Iran Project – Foreign Minister Mohammad Javad Zarif has begun his African tour on Sunday (Oct 22) at the head of a high-ranking delegation by a visit to South Africa which will later take him to Uganda and Niger.

He traveled to South Africa to attend the 13th Meeting of the two countries’ Joint Economic Commission and hold talks with the country’s senior officials on issues of mutual interests as well as regional and global developments.

Upon their arrival in Pretoria, Zarif and his entourage were welcomed by director general for South African foreign ministry for Middle East region and Iran’s Ambassador to the country Mohsen Movahedi Qomi.

At the same gathering, Zulu stated that cooperation with Iran will be safe; underscoring that Pretoria is after promotion of banking relations with Tehran.

The final statement, which included banking cooperation, development and investment, biotechnology, nanotechnology and agriculture, was signed by foreign ministers of the two countries.

Transportation, fishery, honey bee farming and shipping were also among other parts of the final statement.

Moreover, during a meeting Zarif and koana-Mashabane emphasized development of political and economic relations.

The 12th round of Iran-South Africa Joint Commission convened during a visit to Tehran by South African foreign minister in 2015 when the two sides agreed to hold the next round of the commission in Pretoria.

Annual trade exchanges between Iran and South Africa used to be more than $2 billion which have shrank to some $140 million due to unilateral sanctions imposed on Tehran over the past decade.