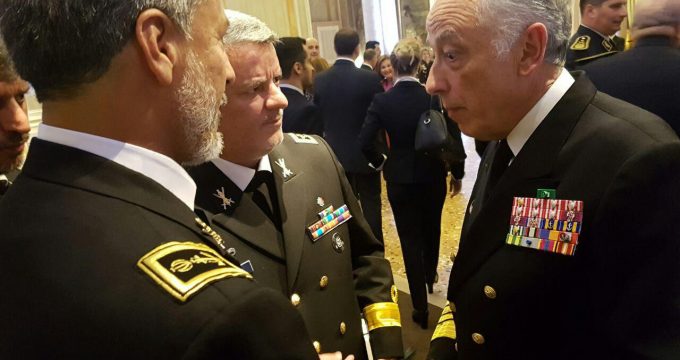 October 19 – The Iran Project – Iranian Navy Commander Rear Admiral Habibollah Sayyari has travelled to Venice, Italy, to attend Regional Seapower Symposium of the Mediterranean and Black Sea Countries as a special guest on a first such visit of an Iranian military commander to a European country,

The commander is going to discuss military cooperation and exchange of experiences in the fight against piracy during his Italy visit.

On Tuesday night, the Iranian Navy commander held talks with nine foreign counterparts and ranking commanders during a formal dinner on the sidelines of the Venice symposium.

Sayyari has so far held talks with navy commanders of the host country, Greece, Bulgaria, Spain, Portugal, South Africa, Croatia, Algeria, Argentina and Russia on the sidelines of the Venice event.

All bilateral talks focused on development of naval cooperation as well as establishment of security in the international waters by getting Iran’s invaluable experiences in the area.

Upon arrival in the Italian capital, Sayyari said the ill-advised words uttered by the US President Donald Trump during his recent anti-Iran speech can not make any change in the Persian Gulf name.

“Distortion of the name of the Persian Gulf by the US president is an indication of his ignorance about history,” he said.

“It would be so disgraceful if Trump’s October 13 speech were the collection of his stances and strategies on which he had worked for months to take against Iran,” Sayyari stressed.

Meanwhile, the navy commanders of different world countries who have attended the Venice seapower symposium told their Iranian counterpart they are willing to gain experiences from Iran in dealing with pirates in the international waters.

The Venice Symposium is the leading forum in the Wider Mediterranean Region, hosting the largest gathering of Navy Leaders, Organizations and Agencies with a key role in the maritime dimension.

The purpose of the Regional Seapower Symposium for the Mediterranean and Black Sea Countries is to create a forum where the leaders of the regional Navies can meet and discuss their common challenges and strengthen mutual co-operation.