A look at Iranian newspaper front pages on October 19

IFP – IFP has taken a look at the front pages of Iranian newspapers on Thursday, October 19, and picked headlines from 12of them. IFP has simply translated the headlines and does not vouch for their accuracy.

The top story in all Iranian newspapers today was the remarks made by the Leader of Iran’s Islamic Revolution Ayatollah Seyyed Ali Khamenei about US President Donald Trump’s anti-Iran rhetoric, Europe’s stances on Iran’s regional presence and missile program, and the nuclear deal between Tehran and world powers.

This was Ayatollah Khamenei’s first official reaction since the Trump administration’s efforts to undermine the Joint Comprehensive Plan of Action.

Several newspapers, particularly the pro-government ones, widely covered the comments by European officials about their resolve to continue trade ties with Tehran. However, Iran’s Leader noted that paying lip service is not enough and they should show their support in action. Ayatollah Khamenei also urged Europe to refrain from interfering in Iran’s defensive program and regional presence.

1- Central Bank Governor: We Have No Illegally Operating Financial Institute 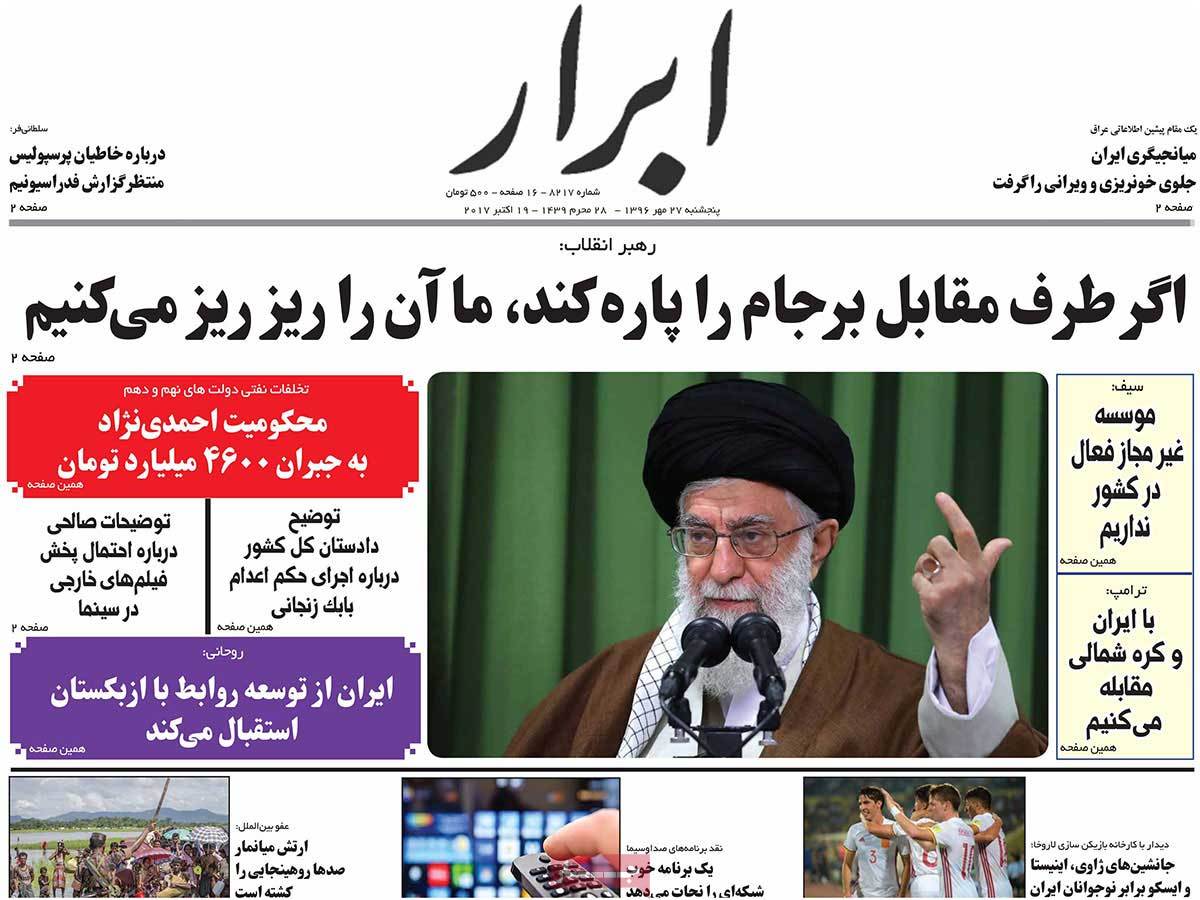 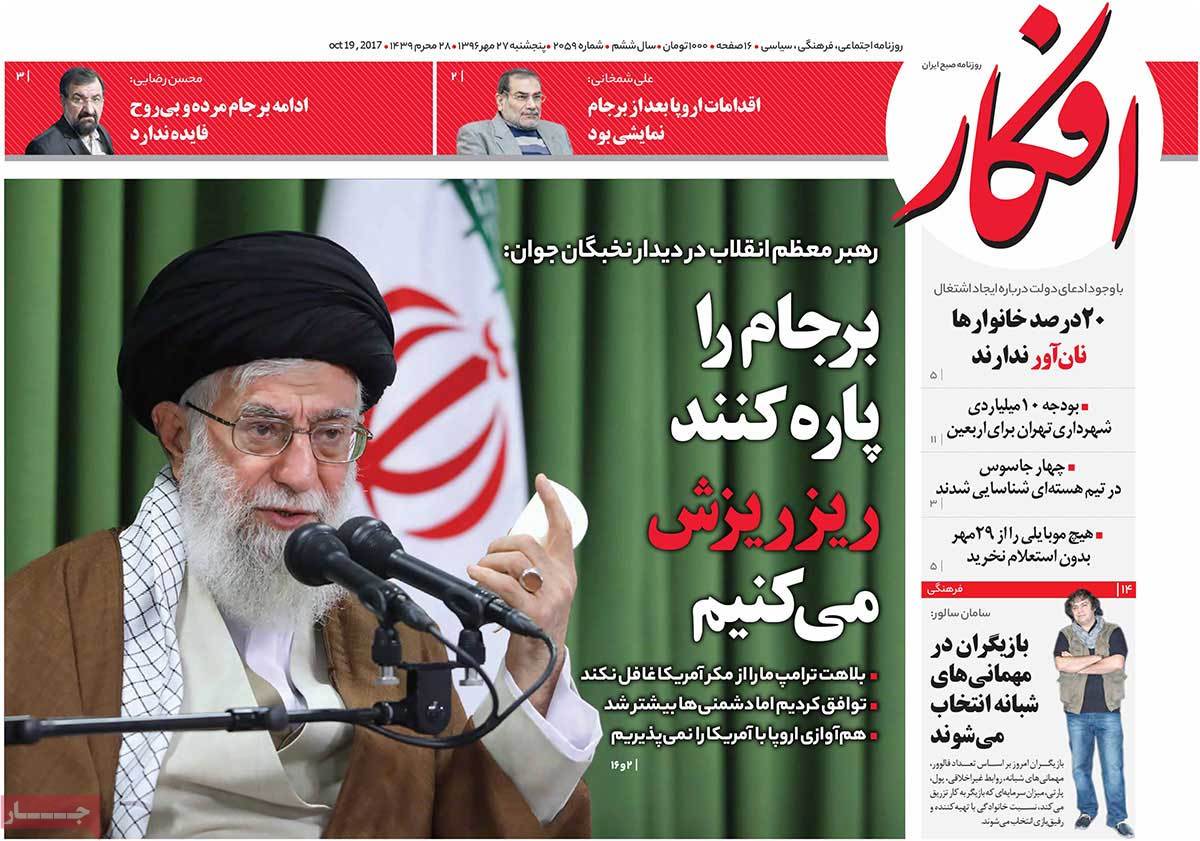 1- Leader: We Won’t Scrap Nuclear Deal If Others Don’t Do It 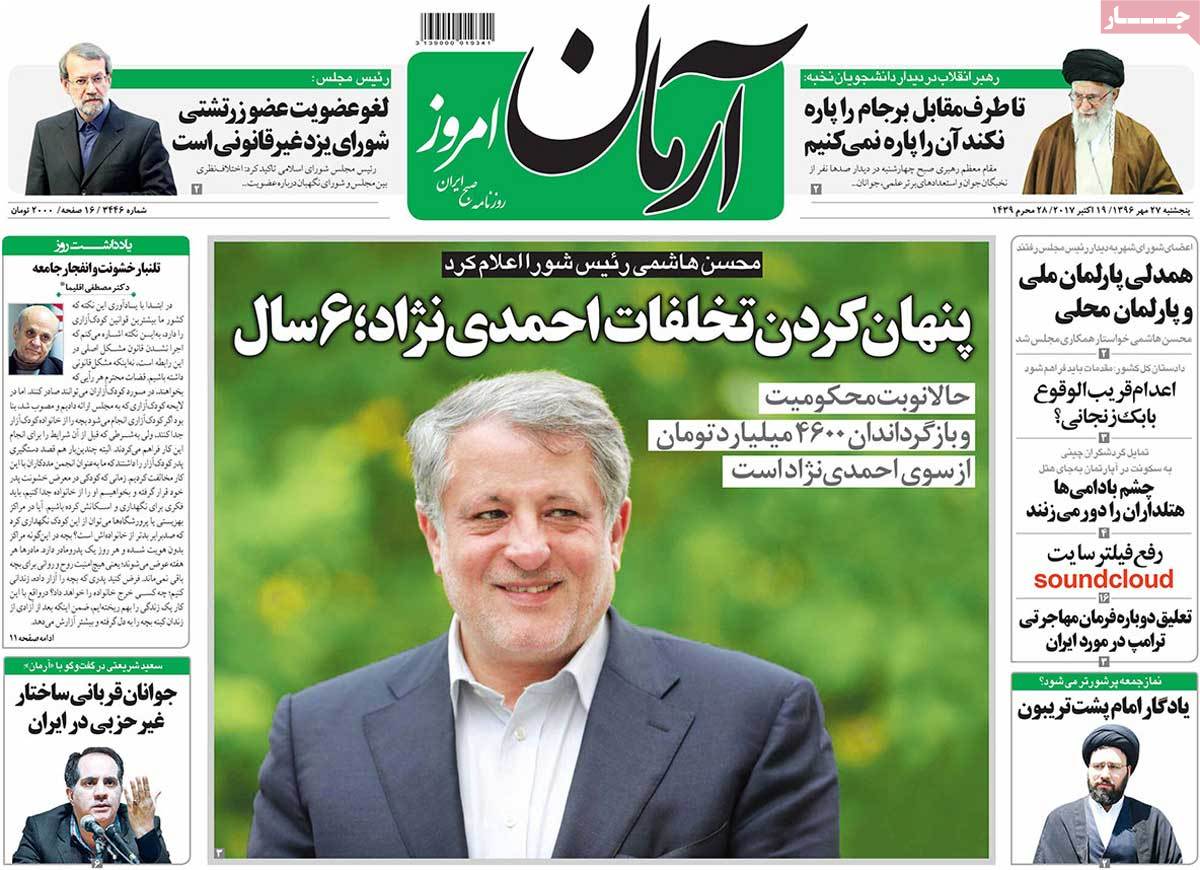 1- Shamkhani: Europe Should Take Practical Steps against US Gov’t

1- Iran Leader: Europe Should Stand against US 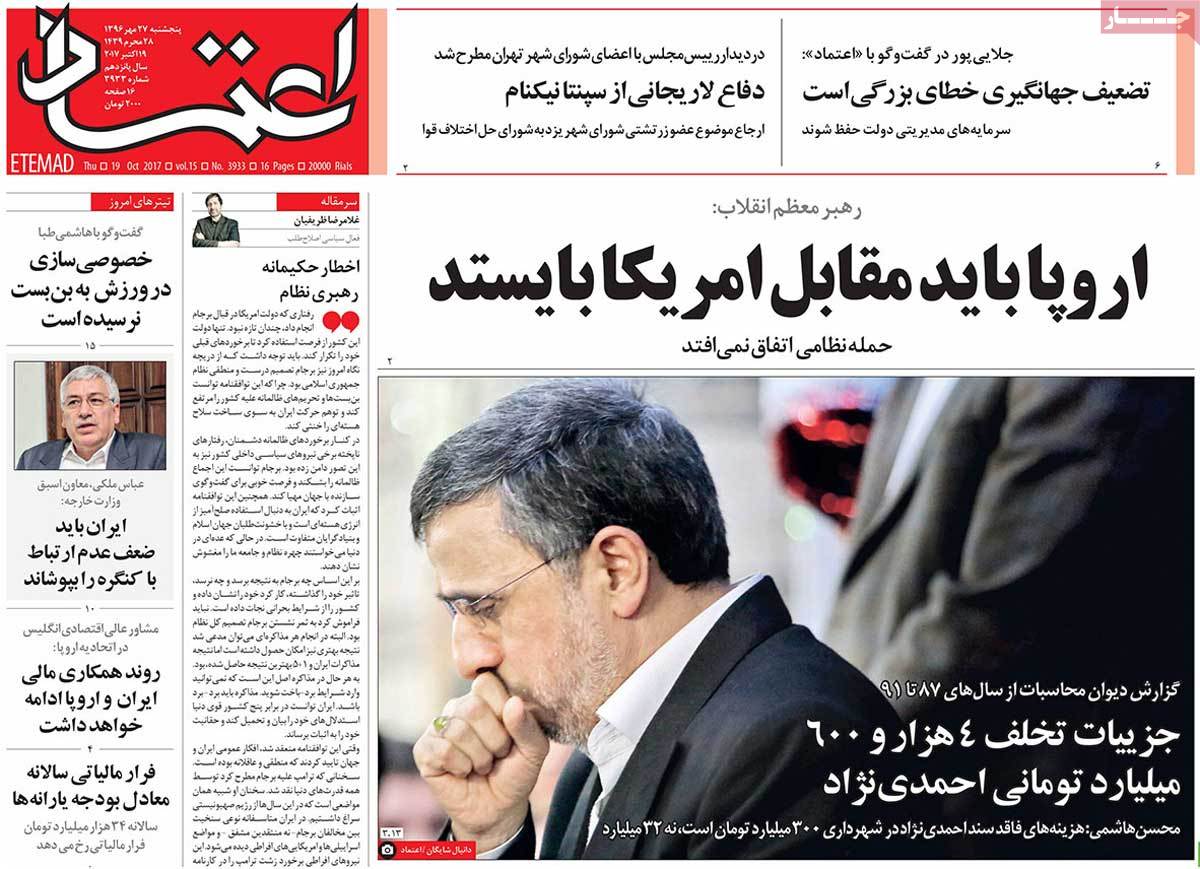 2- Iran Leader: Europeans Should Stand against US Anti-Iran Stances

1- Iran Leader: If They Tear Apart JCPOA, We’ll Shred It

1-Iran Leader: I Don’t Waste My Time by Responding to Rude US President

1- Iran Leader: US Will Once Again Be Defeated by Iranian Nation

1- Iran Leader: JCPOA Is to US Benefit; If They Tear It Apart, We’ll Shred It

3- British Security Official: We’ve Never Been Faced with Terrorist Threats as We Are Today

4- New Yorker: Most Serious Opponents of Iran Back JCPOA 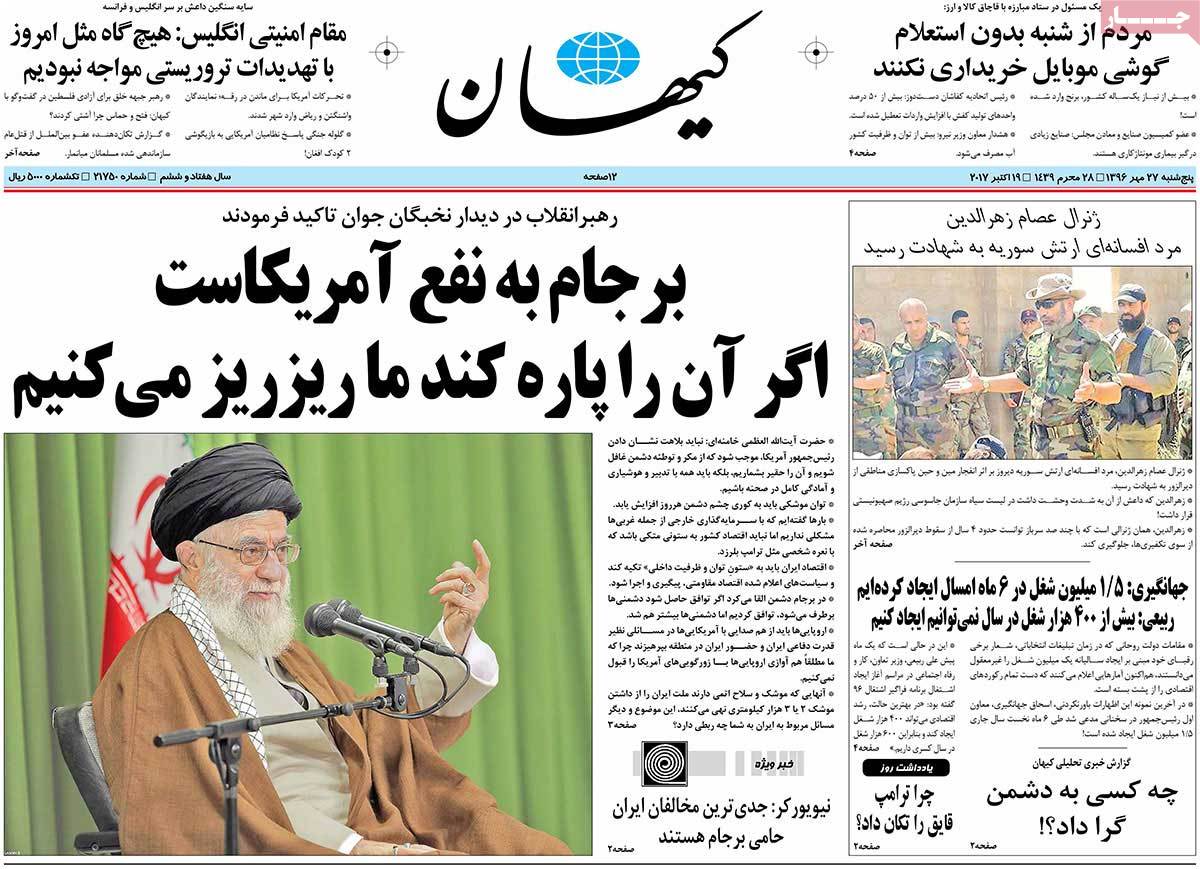 1- We’ve Never Turned Our Back to Negotiation 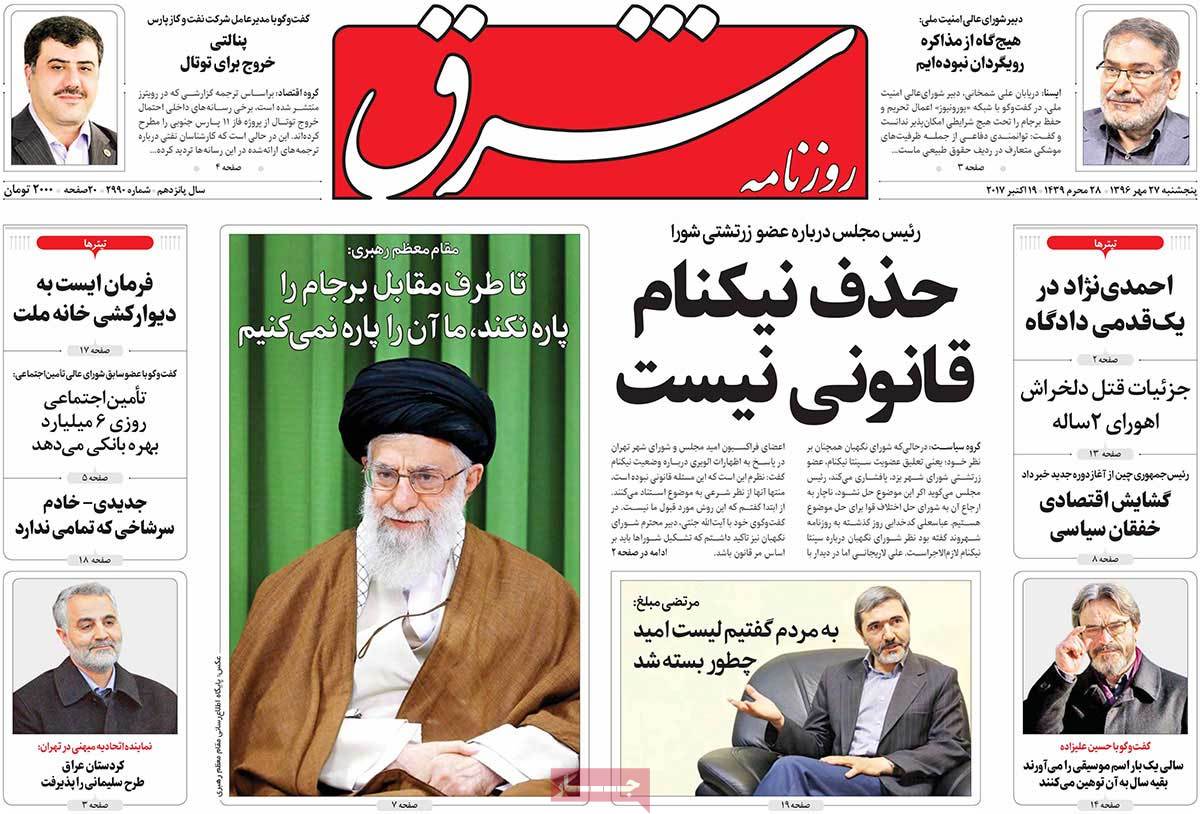