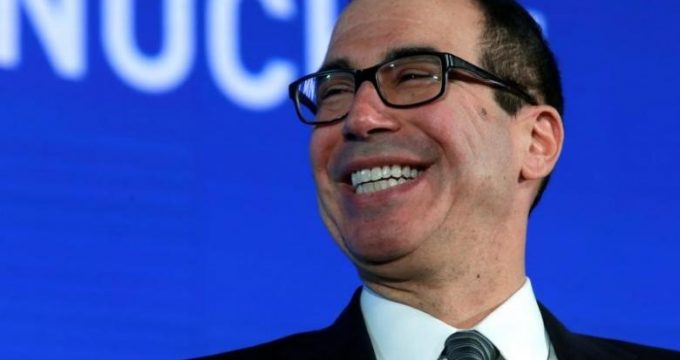 Press TV – The US Treasury Department is planning to introduce new sanctions against Iran’s Islamic Revolution Guards Corps (IRGC), according to US Treasury Secretary Steven Mnuchin.

Speaking to Fox News on Sunday, Mnuchin said he had already discussed the matter with his counterparts in other countries at the latest meetings of the World Bank and International Monetary Fund.

“I’ve had very direct conversations with my counterparts about what we’re trying to do with Iran,” Mnuchin said. “We’re going to be working with them on that.”

The sanctions are part of US President Donald Trump’s supposedly new diplomatic offensive against Tehran, which he unveiled on Friday by refusing to certify the 2015 nuclear deal between Iran and the P5+1 group—the US, the UK, France, China, Russia and Germany.

The Republican president also said in his speech that his administration was going to place “tough sanctions” on the IRGC.

Following Trump’s announcement, the US Treasury added the IRGC to its anti-terrorism sanctions list, claiming in a statement that the elite military force is “providing support to a number of terrorist groups, including Hezbollah and Hamas, as well as to the Taliban.”

The statement said that the force has “played a central role to Iran becoming the world’s foremost state sponsor of terror.”

The US Treasury also slapped sanctions on four entities — three based in Iran and one based in China — over claims of providing “support to the IRGC or Iran’s military.”

IRGC advisers are currently assisting the Iraqi and Syrian forces in their anti-terrorism campaign against foreign-backed Daesh Takfiri militants and other terrorist groups wreaking havoc in both countries.

On Thursday, Iran’s Defense Minister Brigadier General Amir Hatami warned that blacklisting the IRGC would only promote terror and instability in the region and the entire world.

Hatami also praised the IRGC as “the most powerful” force “on the frontline” of the fight against terrorism.

Last week, the IRGC’s commander, Major General Mohammad Ali Jafari, said Iran would treat US troops in the region like Daesh terrorists if Trump designated the IRGC as a terrorist organization.