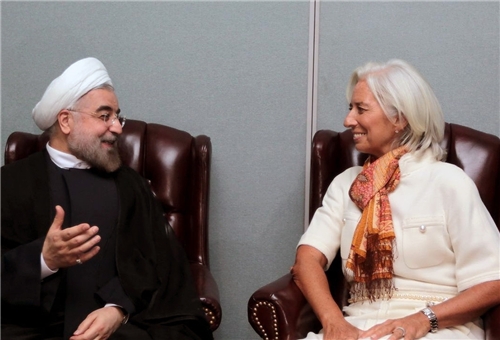 Press TV- The International Monetary Fund (IMF) says its policy in awarding loans to Iran will not change in the wake of increasing US pressures against a landmark nuclear deal that envisages facilitating post-sanctions financial transactions with the country.

IMF chief Christine Lagarde has been quoted by media as saying that the Fund would proceed with its regular Iran policy like it would do with all other member states.

“We see no reason to change anything in the guidelines that we have received from the (IMF) Board and continue to operate in the same manner,” Lagard said in response to a question about the Fund’s approach toward Iran following a recent call by US President Donald Trump on the IMF and World Bank not to provide loans or funds to Iran.

“We operate with 189 members and we only provide support and enter into program negotiations when a country asks for it,” media quoted Lagard as saying.

Lagard’s remarks followed earlier reports that Trump has ordered US executive directors at the IMF and other multilateral development banks to vote against extending loans and funds to Iran.

They also came after an announcement on Friday by US President Donald Trump that he would not certify Iran’s compliance with the nuclear deal.

Trump’s announcement drew immediate reactions from the international community with America’s European partners insisting that they would struggle to keep the deal alive despite Washington’s threats to kill it.

The nuclear deal that Iran sealed with the five permanent members of the UN Security Council plus Germany in 2015 envisages the removal of certain economic sanctions against the country in return for measures by Tehran to restrict certain aspects of its nuclear energy activities.

Even though all parties to the deal have stood in its defense, Trump has described it as “America’s worst deal,” and has repeatedly indicated that he would move to pull the US out of it.