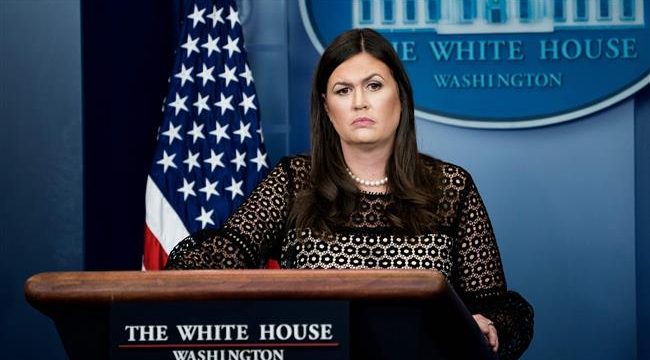 Press TV – The White House press secretary escalates the feud between her boss, US President Donald Trump, and a top Republican opposing him on foreign policy, particularly the administration’s approach towards the Iran nuclear deal.

Sarah Huckabee Sanders hammered the Republican chairman of the Senate Foreign Relations Committee, at a briefing on Tuesday, accusing him of working with Democrats in favor of the nuclear deal, negotiated during the administration of former President Barack Obama.

The comment escalated the war of words already underway between Trump and Tennessee Senator Bob Corker.

“Senator Corker worked with Nancy Pelosi and the Obama administration to pave the way for that and rolled out the red carpet for the Iran deal,” she said.

The retiring senator’s office released a statement, rejecting the claim as “not true.”

“He worked with them on the legislation that rolled that out,” said the White House press secretary. “That’s what helped I think put things in motion. He may have voted against the deal ultimately, but he not only allowed the deal to happen, he gave it credibility. I stand by my statement.”

The president is expected to “decertify” the nuclear agreement, known as the Joint Comprehensive Plan of Action (JCPOA), when he faces an October 15 deadline.

Trump’s failure to certify the nuclear agreement would trigger a 60-day period, during which the US Congress would have to decide whether to violate the deal by re-imposing anti-Iran sanctions.

Some of Trump’s allies including White House chief strategist Stephen Bannon, have called on Corker to resign.

“I think that’s a decision for Senator Corker and the people of Tennessee,” Sanders said “Senator Corker may have an opinion, but the facts certainly don’t lie… The president’s been very successful.”

The senator, who is retiring after his current term, has accused Trump of treating the country like “a reality show.”

Since assuming office, Trump has been alienating himself from other top Republicans.

“I don’t think he’s alienated anyone, I think Congress has alienated themselves by not actually getting the job done that the people of this country elected them to do,” Sanders said. “They all promised and campaigned on repealing and replacing ObamaCare. They haven’t done that. They’ve campaigned on tax reform. Hopefully, we see that happen. We’re certainly committed to that and think we’ll get there.”

Trump who has failed to effectively “repeal and replace” Obamacare, the previous administration’s signature healthcare measure despite the Republican majority in the US Congress, is in need of the GOPers’ support to get his tax reform through.

“But time and time again Congress has made promises and failed to deliver. If anyone’s being alienated, it’s people who are promising things and not delivering on them,” asserted the White House press secretary.

Recent reports said US Secretary of State Rex Tillerson was also on the verge of resigning amid mounting policy disputes with the White House.

Iran, meanwhile, has vowed to properly respond to any breaches in the deal, also backed by the UK, Russia, Germany, China and France.