Al-Moallem: US-led coalition destroying everything in Syria except for ISIS

SANA – Deputy Prime Minister, Foreign and Expatriates Minister Walid al-Moallem affirmed that the international coalition led by Washington is destroying everything in Syria except for ISIS terrorist organization.

During a meeting with 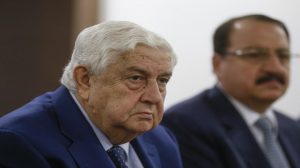 his Russian counterpart Sergey Lavrov in the Russian city of Sochi on Wednesday, al-Moallem said that Syria will demand the disbanding of the US-led international coalition which Washington uses to destroy the country and prolong the war indefinitely.

In turn, Lavrov affirmed that the victories achieved by the Syrian Arab Army, supported by the Russian Air Force, have made the efforts of solving the crisis in Syria more successful.

“Today we have a chance to discuss foreign policy aspects of our partnership, first of all that besides the success in the war on terror while the Syrian army is advancing backed by Russia’s Aerospace Forces, the preparations for political settlement are becoming more pressing,” he added.

“We will also strongly counter any attempts to politicize the chemical dossier and the attempts to accuse the Syrian government without any proof or professional investigation of a whole number of incidents, which occurred with the use of chemical warfare agents on your country’s territory,” Lavrov said. 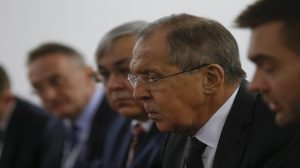 He pointed out that the attempts continue on the part of the UN General Assembly and the Human Rights Council to “politicize the situation around the Syrian settlement and put forward one-sided accusations.”

Lavrov added that he also discussed cooperation of delegations from the two countries at international venues, including in New York and Geneva.

The Russian Foreign Minister also welcomed the joint success of the two countries in the war on terror.

Lavrov recalled that “certain decisions” were reached on Tuesday at a meeting of the Russian-Syrian intergovernmental committee, attended by Russian Deputy Prime Minister Dmitry Rogozin.