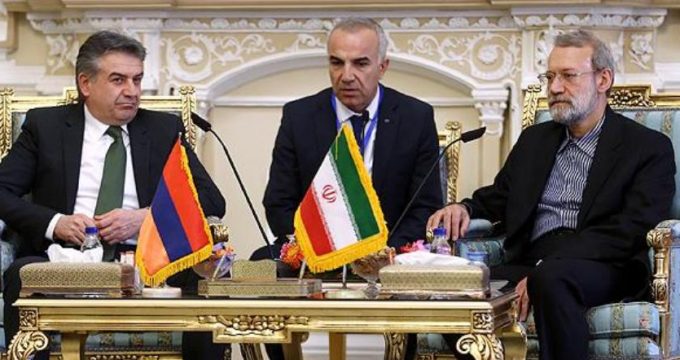 In a meeting with Iranian Parliament Speaker Ali Larijani late on Monday, he added, “We believe that regional problem can be solved only through peaceful dialogues and we have no confidence in war and conflict.”

Expressing pleasure over his visit to Tehran, he said, “I have told everywhere that Iran-Armenia are very friendly and our parliamentary and political ties are at excellent level and we will try to make optimal use of both countries in the field of economy.”

Karapetyan referred to Europeans’ interest to invest in Iran, saying, “We will soon set up a free zone in the vicinity of Iran’s border and we have already invited our Eurasian and European friends to attend the zone.”

Free zone near Iran’s border serves as window to foreigners as well as a door to Iran, he said.

Larijani, for his part, said, “Iran-Armenia ties are at a high level and we will also support expansion of parliamentary, economic and political cooperation between the two nations.”

Grounds for investment in Iran and Armenia are prepared and trade ties should be developed further through proper recognition of both countries’ needs.

Referring to the significance of tourism industry, he added that policy adopted with regard to revoking visas proved very effective in promoting tourism and brought about boom in other sectors such as agriculture, industry and transit.

Larijani further noted that the only useful way for the settlement of Karabakh dispute is dialogue and peaceful negotiations.

Armenian premier arrived in Tehran on Monday morning at the head of high-ranking political and economic delegation and was officially welcomed by Iran’s Frist Vice President Eshaq Jahangiri.