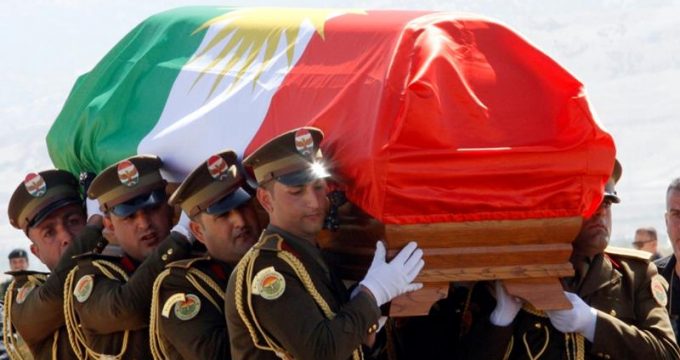 Speaking to Iraqi media, Al-Mawla said the lawmakers returned to Baghdad with the same plane that had brought them to Sulaymaniyeh Airport when they saw the coffin draped by the Kurdish flag.

The State of Law Coalition led by Nouri al-Maliki had also dispatched a delegation to the ceremony which refused to participate in the funeral procession after seeing the flag of Kurdistan region.

The delegation dispatched by the Iraqi Prime Minister Hayder al-Abadi has also reportedly protested to the decision.

The Kurdish flag on the coffin also triggered a wave of protests on Iraqi media, a large number of whom interrupter their live broadcast of the ceremony.

Despite all the oppositions from inside and outside Iraq, certain Kurd officials insisted on holding a referendum in Iraqi Kurdistan region on September 25.

The Iraqi and international community, Iraq’s neighboting states in particular including Iran and Turkey, believe that the move would lead in destabilization of the region.