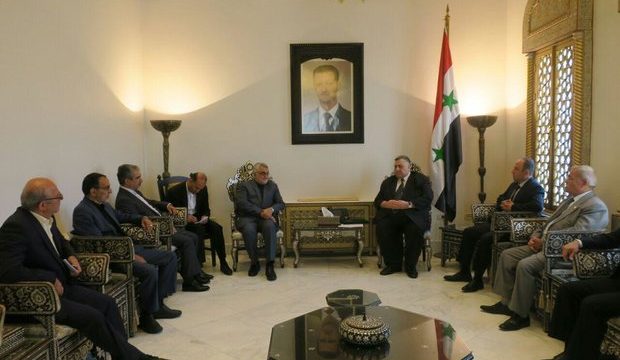 US plots thwarted in Syria: Boroujerdi

MNA – Iranian senior MP Alaeddin Boroujerdi while in Damascus stressed that the US and Western countries’ plots aimed at undermining Syria’s independence have been all thwarted.

Head of the Parliament’s National Security and Foreign Policy Commission Alaeddin Boroujerdi made the remarks in a meeting with Syria’s newly-appointed Speaker of the People’s Council of Syria, Hammouda Sabbagh, on Wednesday in Damascus.

“The US plots targeting the national sovereignty, territorial integrity and independence of Syria have all been foiled and thwarted,” Boroujerdi said. “One of the objectives of such plots was to obscure the Palestinian cause which is the key priority of Iran and Syria.”

Boroujerdi highlighted Iran’s continued support for Syria during the reconstruction of the country after the defeat of terrorism, calling for closer parliamentary ties between the two countries in this regard.

Sabbagh, for his part, maintained that Iran’s support and cooperation have led to major victories for Syria such as the liberation of Aleppo from terrorists pouring into Syria from all across the world.

“We are confident that the unique relations between Iran and Syria will always remain at its best and in line with giving support to regional nations in fight against takfiri terrorism,” he stressed.