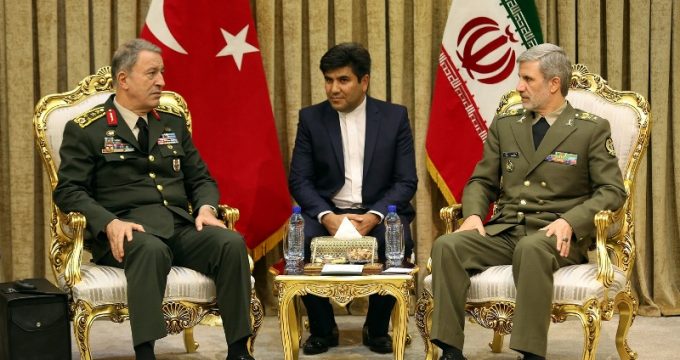 IRNA – Defense Minister General Amir Hatami said on Tuesday that Iran and Turkey as two major and influential countries in the region will never allow the Zionist regime fulfill its new scenario in the region.

In a meeting with Chief of Staff of the Turkish Armed Forces General Hulusi Akar on Tuesday, General Hatami referred to longstanding friendship between Iran and Turkey and the two nations’ historic, religious and cultural commonalities, saying that Turkey enjoys a special status in Iran’s foreign, defense and security policies.

Noting that today westerners along with the Zionist regime have written a new prescription for the region, he said that the US and Israel have taken the new strategy of splitting regional states on agenda after Daesh scenario failed, but Iran and Turkey as the two major regional players will never allow a new scenario to come true.

Hatami also voiced Iran’s 12nd government’s support for military and security cooperation between the two counties, especially in the sphere of fighting terrorism, hoping that the increasing trend of mutual collaboration will strengthen the two countries’ stability and security.

General Akar, for his part, said that presence of Iran’s chief of staff of the armed forces in Ankara opened a new chapter in Tehran-Ankara cooperation and they should make up for the past drawbacks speedily through heeding joint areas of cooperation.

“We believe that Iran-Turkey collaboration in future will foster sustainable security and stability in the region and world,” he said.

Hailing the ample commonalities between the two nations and governments, Turkish general hoped that defense and military relations would enhance like political, economic and cultural ties.

“We will support Syrian territorial integrity and cohesion and will never recognize any changes in borderlines,” he said.

Akar who arrived in Tehran discussed bilateral, regional and international issues with General Hatami in the premises of Defense Ministry today.