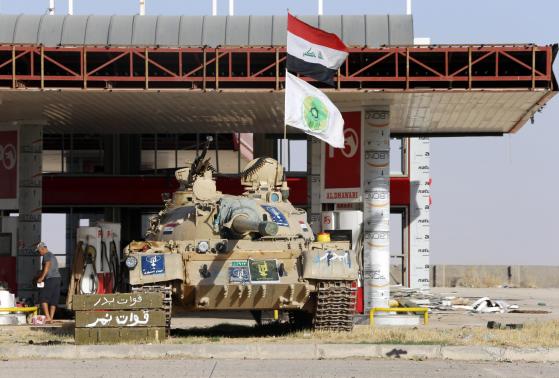 Press TV- Iraqi government forces, backed by allied fighters from Popular Mobilization Units, have established control over nearly a dozen villages around Hawijah after the launch of the second phase of offensive to dislodge Daesh Takfiri militants from their stronghold in the oil-rich northern province of Kirkuk.

Yarallah noted that government forces and their allies had raided al-Abbasi region southwest of Kirkuk, liberated its residential complex and hoisted the national flag over a number of buildings there.

The high-ranking military commander went on to say that army, federal police, rapid response units and Hashd al-Sha’abi brigades had liberated the towns of Rashad and Ryadh in addition to surrounding areas.

Iraqi Prime Minister Haider al-Abadi on Friday announced the start of the second phase of offensive to liberate Hawijah from the grip of Daesh Takfiris.

“We announce the start of the second phase of the liberation of Hawijah and all the surrounding areas to the west of Kirkuk, and as promised the sons of our country are continuing to liberate every inch of the land of Iraq and crush the gangs of terrorist Daesh group,” said Abadi in a statement.

The first phase of the operation to liberate Hawijah was launched on September 21.

The operation to free Hawijah came as tensions are running high between Baghdad government and the semi-autonomous region of Kurdistan after the Kurdish region held a controversial referendum on independence of Kurdistan and disputed areas, including Kirkuk, from the rest of the Iraqi territory.