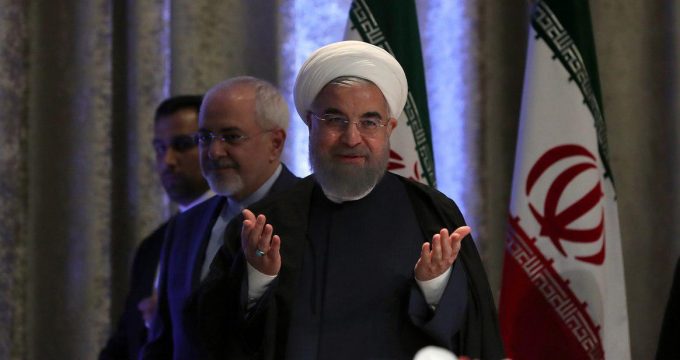 US and Iran meet as Trump threat looms over nuke deal

AFP | Dave Clark, Laurence Benhamou: Washington and Tehran’s top diplomats confronted each other for the first time Wednesday as envoys scrambled to save the Iran nuclear deal from a skeptical Donald Trump.

US Secretary of State Rex Tillerson and Iranian Foreign Minister Mohammad Javad Zarif met as signatories to the 2015 accord at an EU-hosted event on the sidelines of the UN General Assembly.

European ministers called the meeting to examine ways to save a deal that US President Trump is poised to denounce, but Tehran and Washington remain far apart.

EU foreign policy chief Federica Mogherini put the bravest possible face on the encounter, stressing that Iran and the major powers agree the deal is “delivering.”

But Tillerson said the discussion had been a political one and that even if Iran is in “technical” compliance with the pact, “significant differences” remain.

Speaking to Iran’s state broadcaster after the meeting, Zarif said all “members, except one country, stressed the importance of fully observing the (deal), its being non-negotiable and that all sides should remain committed to this international achievement.”

He condemned Washington’s “verbosity, especially the very insolent remarks by the president of the country”.

Britain, China, France, Germany, Russia and the United States signed the 2015 deal with Iran in a bid to prevent it developing a nuclear weapons capability.

Tehran agreed to surrender most of its enriched uranium and accept limits to its nuclear activities in return for the lifting of international sanctions imposed over its nuclear program.

The previous US administration accepted that the deal was limited to the nuclear issue, and hailed it as a victory for Barack Obama’s non-proliferation agenda.

But Trump has denounced the agreement as an “embarrassment” to the United States and has accused Iran of breaking it in “spirit” by arming militant groups and destabilizing the Middle East.

In particular, he objects to the “sunset clause” that would see Iran resume some enrichment from 2025.

Tillerson argued that the preamble to the agreement implied that it would lead to a more stable Middle East and said Iran remains a source of instability.

“Regrettably, since the agreement was confirmed we have seen anything but a more peaceful, stable region and this is a real issue,” he told reporters.

Tillerson said Iran continues to prop up the “horrible” regime of Syria’s Bashar al-Assad, carry out banned missile tests and harass shipping in the Gulf.

European diplomats, while sharing those concerns, are becoming exasperated by the argument — insisting the accord was designed solely to stop Iran getting the bomb.

“There is no need to renegotiate parts of the agreement because the agreement is concerning a nuclear program and as such is delivering,” Mogherini said.

The European chief diplomat, who chaired the meeting, argued that it would be unwise to re-open the deal at a time when the world is facing a nuclear threat from North Korea.

“We already have one potential nuclear crisis. We definitely do not need to go into another one,” she said.

There was some sympathy for the US position from France, whose President Emmanuel Macron said the deal could be expanded to ban missile tests and cut the sunset clause.

But even he insisted that the core deal not be dumped and the Joint Comprehensive Plan of Action that the deal signatories implemented last year must stay in place.

Iran has, however, ruled out renegotiating the accord.

Addressing the UN assembly a day after Trump appeared on the same podium to attack Iran, Rouhani warned the fate of the deal cannot be decided by “one or two countries.”

“It will be a great pity if this agreement were to be destroyed by rogue newcomers to the world of politics. The world will have lost a great opportunity,” he said.

“By violating its international commitments, the new US administration only destroys its own credibility.”

Despite the anger, Tillerson said his first encounter with Zarif had been “matter of fact.”

“There was no yelling, we didn’t throw shoes at one another,” the former oil executive said.

“It was not an angry tone at all. It was a very, very matter of fact exchange about how we see this agreement very differently.”

Trump is due to report to the US Congress on October 15 on whether or not he believes that Iran is in compliance with the nuclear deal.

If, as now appears increasingly likely, he decides that it is not, it could open the way for renewed US sanctions and perhaps the collapse of the agreement.

Trump said Wednesday he had made his decision but was not yet ready to reveal it.

Tillerson told reporters he was aware that a decision had been made, but that Trump had even refused to tell British Prime Minister Theresa May what it is.