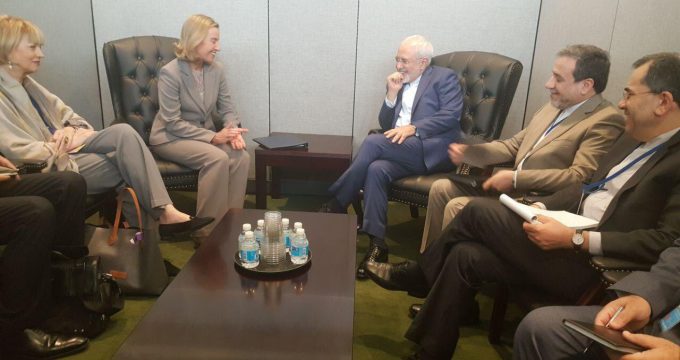 September 21, The Iran Project – On the fourth day, in continuation of his meetings since his arrival in New York on Sunday (Sep 17), the Iranian Foreign Minister, who is accompanying President Hasssan Rouhani in his visit for participating and addressing the 72nd session of the UN General Assembly, has held talks with EU and his counterparts of different countries.

In a meeting with European Union’s Foreign Policy Chief, Federica Mogherini, Zarif conferred on broadening of bilateral relations on the sidelines of the UN General Assembly on Wednesday.

The two sides also discussed the July 2015 nuclear deal known as Joint Comprehensive Plan of Action (JCPOA) and exchanged views on the ways to fully implement the agreement.

Zarif also took part in a meeting attended by his Iraqi, Turkish counterparts, urging the need to make post-Daesh stabilization efforts in Iraq.

Zarif, Turkish FM Mevlut Cavusoglu and Iraqi FM Ibrahim al-Jaafari also made the call in a statement issued at the end of their trilateral meeting on September 20, 2017 to discuss the referendum plan of the Kurdistan Regional Government and reaffirmed their strong commitment to the territorial integrity and political unity of Iraq.

Meanwhile, Zarif also held talks with his French and German counterparts on the sidelines of the UN General Assembly in New York.

“Supporting the JCPOA and the need for all parties to remain committed to this multilateral and international agreement has always been Germany’s transparent stance,” Gabriel noted.

Zarif also discussed issues of mutual interest with France’s FM Jean-Yves Le Drian in a meeting on Wednesday, where they conferred on bilateral relations between Tehran and Paris.

They exchanged views on regional issues, particularly the referendum on Iraqi Kurdistan’s independence, and underlined the necessity of maintaining Iraq’s territorial integrity and respecting the Arab country’s Constitution.

And at the end, Foreign Minister Zarif participated in the 5+1 joint commission’s meeting, where representatives from Iran and the six world powers had come together to highlight the necessity of complying with Islamic Republic’s nuclear agreement, despite threats by US President Donald Trump to scrap the deal.