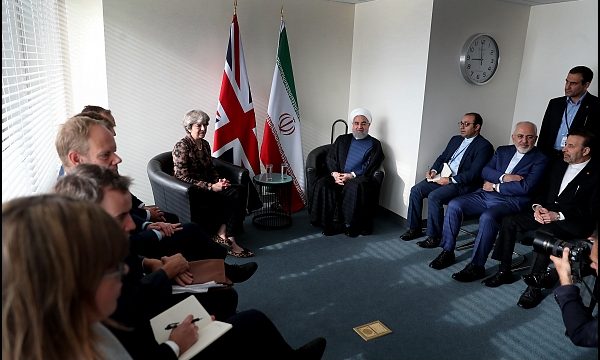 Press TV- British Prime Minister Theresa May has strongly backed the 2015 Iranian nuclear agreement, calling on all parties to remain fully committed to the deal, known as the Joint Comprehensive Plan of Action (JCPOA).

“I explicitly announced at the United Nations that the JCPOA is a very important agreement, and we are determined to continue [implementing] it,” May said during a meeting with Iranian President Hassan Rouhani in New York on Wednesday on the sidelines of the 72nd UN General Assembly session, according to the official website of the Iranian president.

“We should make sure… that obligations stipulated in the JCPOA will be fully implemented,” she added, urging all parties to the deal, including the US, to fulfill their commitments under the deal.

For his part, Rouhani urged all parties to the JCPOA to live up to their commitments under the nuclear agreement, adding that all should make efforts to contribute to the sustainability of the deal.

Iran and the five permanent members of the UN Security Council – the United States, France, Britain, Russia and China – plus Germany signed the JCPOA on July 14, 2015 and started implementing it on January 16, 2016.

The administration of US President Donald Trump has on numerous occasions criticized the deal, calling it a mistake.

Backed by UN Security Council Resolution 2231, the JCPOA is an international agreement, which makes it impossible for any party to the deal to withdraw from it.

During the meeting, Rouhani also expressed Tehran’s readiness to further cooperate with London on regional issues.

The Iranian president and the British prime minister also called for the expansion of bilateral ties.

The two sides also discussed the latest developments in the Middle East region, including the war in Yemen and the upcoming Kurdish independence referendum in Iraq.

Heading a high-ranking delegation, the Iranian president arrived in New York on Sunday night to participate in the 72nd session of the United Nations General Assembly and hold talks with senior officials of some other countries attending the meeting.

Rouhani has met with several leaders and heads of state on the sidelines of the UN General Assembly meeting.

#IranDeal, Hassan Rouhani, Theresa May, UNGA 72 September 21, 2017
Negotiations with US on any issues would be ‘waste of time’: Rouhani
Iran to send 2nd humanitarian aid cargo to Myanmar Muslims on Thursday