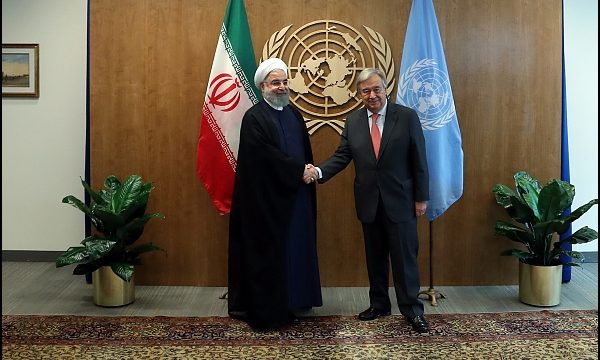 Press TV – The UN chief has stressed the importance of the correct implementation of the JCPOA during a meeting with Iranian President Hassan Rouhani.

On Monday, António Guterres met with Rouhani, who is in New York to take part in the 72nd annual session of the United Nations General Assembly.

Stressing that Iran is committed to the Joint Comprehensive Plan of Action (JCPOA), Guterres noted that the UN wishes for closer cooperation with Tehran towards diplomatically solving regional countries issues.

The JCPOA was signed by Iran and the five permanent members of the United Nations Security Council – the United States, France, Britain, Russia and China – plus Germany on July 14, 2015 and went into effect on January 16, 2016.

US President Donald Trump, who had made no secret of opposing the nuclear agreement in his election campaign, has threatened to “tear up” the agreement, calling it “the worst deal ever negotiated.”

Tensions have risen between Tehran and Washington since Trump entered the Oval Office, with each side accusing the other of failing to honor the spirit of the JCPOA.

In his turn, Rouhani called on the global body to do its best to implement the World Against Violence and Extremism (WAVE) resolution.

“Iran has engaged in valuable operations against terrorism in the region. Political solutions must be sought for regional problems,” he added.

Rouhani also highlighted the importance of supporting Iraq’s constitution and territorial integrity while stressing the dangers of the upcoming referendum in Iraq’s Kurdistan region.

The region is adamant to hold an independence referendum on September 25 despite regional and international opposition. Critics say partitioning Iraq could be the last thing the country, scarred by years of violence, needs.

Rouhani also met with French President Emmanuel Macron (seen above) at the Millennium hotel on the sidelines of the UN General Assembly.