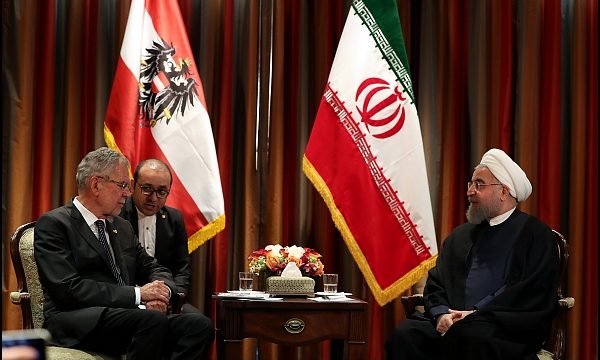 Opportunities have been prepared for Iran to reinforce relations with the European countries, President Rouhani said in the meeting which was held Monday evening.

He also urged promotion of the levels of the two capitals cooperation in investment, trade, scientific and new technologies fields.

There are many investment opportunities for foreign countries like Austria in Iran on energy, road and railways, banking and insurance, tourism and research and technology fields, President Rouhani stressed.

He further pointed to the role of Iran nuclear deal, also known as the Joint Comprehensive Plan of Action (JCPOA), in developing joint cooperation.

He went on to say that full implementation of the JCPOA will benefit both EU and the whole region.

The Iranian President also urged EU to play a more active role in boosting mutual cooperation in line with its own interests and also with those of the European firms.

Commenting on regional issues such as the fight against terrorism, President Rouhani said Iran responded positively to the requests of the Iraqi and Syrian governments and will stay with them in countering terrorism until the day to reach final victory.

The President also warned against ‘changing geographical borders’ of regional states stressing that it is a ‘dangerous’ act.

‘The new source of concern is holding a referendum in Iraq’s Kurdistan Region which can lead to new and very serious tensions and conflicts,’ said the Iranian President.

Meanwhile, President Van der Bellen called for promoting of cooperation between Tehran and Vienna in all fields.

The promising statistics regarding Iran’s Economy, has encouraged Austria to participate in the Iranian market, he added.