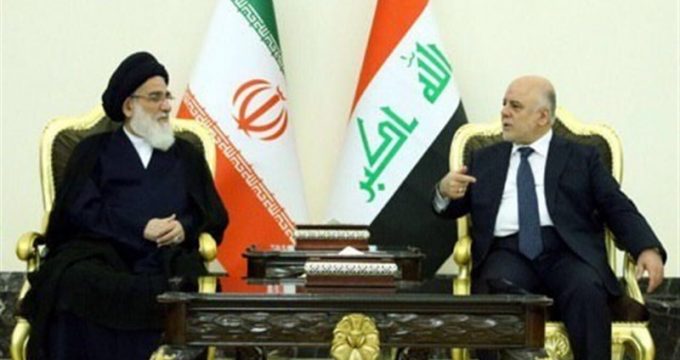 Iranian Diplomacy- Here is how Ayatollah Mahmoud Hashemi Shahroudi tries to strike a balance between his domestic and international roles.

In less than a month since his appointment as the chairman of the expediency council, Ayatollah Mahmoud Hashemi Shahroudi decided to have first international visit in Iraq, his country of birth.

After the interim chairmanship of Ayatollah Ali Movahedi Kermani, Supreme Leader Ayatollah Ali Khamenei appointed Hashemi Shahroudi as the successor of late Ayatollah Hashemi Rafsanjani, the ex-chairman of the expediency council. At a first glance, choosing Iraq as the first diplomatic destination seems to be driven by personal interest, a tribute to the time Hashemi Shahroudi lived in the country. His bureau said in a statement the unofficial visit was intended as a pilgrimage to the holy Shia shrines. However, the analysts of the Arab world believed the visit was meant to resolve the differences between political Shia forces in Iraq.

Even though the claim finds no proof in the official statements on Hashemi Shahroudi’s visits in Iraq, his meetings with Iraqi officials, overshadowed by reports from ISIS, do not seem to be exactly unofficial. During his meeting with Vice President Nouri al-Maliki, he stressed on the necessity to fight ISIS and called US’ claim of fighting with terrorism to be under false colors. His remarks indicate that, apart from his pilgrimage, he also sought to resolve the region’s strategic issues.

Hashemi Shahroudi has been known as a judicial figure. The mentality is caused by his two successive terms as chief magistrate. However, ever since he was appointed to head the expediency council, he has turned into a political figure. His recent Iraq visit indicates that he is also reaching out after a diplomatic reputation of international scale so that he could play a more effective role during critical situations in line with the establishment’s expediency.

Hashemi Rafsanjani used to play the same role with his full grasp of the countries in the region. His knowledge was because of his political and diplomatic responsibilities during his tenures as Parliament Speaker, President, and the chairman of the expediency council. Everything once associated with Rafsanjani seems to be transferred to Shahroudi.

Is Hashemi Shahroudi a Reformist or a Principlist? This is a question asked about figures appointed to important positions. He is one of the prominent members of the Society of Seminary Teachers of Qom, considered a religious Principlist body. The Society backed Mahmoud Ahmadinejad’s presidential campaign, who is also recently appointed as a member of the expediency council, too. Of course, the Society backed Ahmadinejad even when Hashemi Rafsanjani was its chairman. Perhaps that is why in his memoir, ex-parliament speaker and prominent moderate figure Akbar Nategh Nouri describes Hashemi Shahroudi as “not part of the Right or the Left, nor part of a bloc”. Many in politics and media find Shahroudi a moderate Principlist.

Nonetheless, in the absence of Hashemi Rafsanjani, Mahmoud Ahmadinejad seems to feel more reassured with the new boss. His congratulation message issued after the appointment of Shahroudi confirmed the speculation. Rumors about a meeting of the two could be another sign if not denied by Shahroudi’s bureau.

The abrupt demise of Ayatollah Hashemi Rafsanjani sparked a plethora of speculations about his successors, ranging from Nategh Nouri, Ali Akbar Velayati, Movahedi Kermani to Hassan Rouhani and Mahmoud Ahmadinejad.  However, Ayatollah Hashemi Shahroudi was the one finally chosen, in spite of his health conditions and a recent surgery.

However, his odds were higher than others because the expediency council’s function is to end all the differences between bodies of the establishment. For a council assigned to discern the expediency in case of differences between the Parliament and the Guardian Council, an individual with a long term as the head of the supreme council in charge of conflict settlement among the branches of the government seems a sensible choice.

*The article above was originally published in Persian on moderate pro-reform website Khabar Online. Minor data has been added to the piece for clarification.