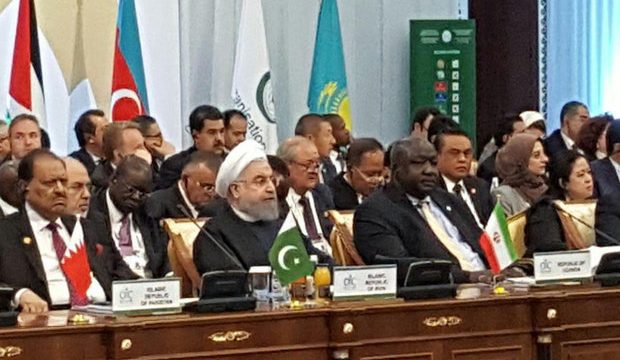 OIC Summit on Science, Technologies kicks off in Astana

MNA – The first OIC Summit on Science and Technologies kicked off on Sunday, in Kazakhstan, Kazinform reported.

Summit on Science and Technologies of the Organization of Islamic Cooperation, initiated by President Nursultan Nazarbayev, was held on Sunday in Kazakh capital city, Astana. The event was attended by Iranian President Hassan Rouhani and other heads and officials of the member states of OIC.

The event is slated to give a new impetus to strengthening international ties in development of science and innovations.

The Asian Inter-Parliamentary Forum for Science, Technologies and Innovations includes seven thematic sessions. On the first day of the Forum, the participants will discuss the policy in the sphere of science, technologies and innovations.

The agenda includes also issues of formation of legislative base for the development of education and science sectors in the era of globalization, the role of parliamentarians and the ways of their interaction with the national institutions in implementation of national programs and priorities.

The participants will debate also research and technical dimensions in productivity. Parliamentarians, governmental officials, researchers and experts from Kazakhstan, Azerbaijan, Algeria, Bangladesh, Egypt, India, Indonesia, the Comoro Islands, Pakistan, The Gambia, the Republic of Mali etc. will share their experience at the event.

On the second day of the Forum, the participants will discuss the cooperation among the countries in science, technologies and innovations. The international experience of India, UAE, Cote d’Ivoire, Morocco and Tajikistan will be considered as well.

The issue of transition to “green economy” will be in spotlight of the Forum too.

During the Forum, the Islamic Educational, Scientific and Cultural Organization (ISESCO) will present its research into the best models of regulatory-legal framework and incentive mechanisms in the field of science, technologies and innovations in the OIC member and non-member countries.

ISESCO is an active partner in organization of parliamentary forums together with the UNESCO. It contributes to strengthening the role of parliaments’ science committees or commissions in effective implementation of scientific-technical policy and establishment of cooperation among various components of innovation systems as well as in attraction and concentration of resources for the promotion of Kazakhstan’s scientific development.

A final document – Astana Declaration on Strengthening Inter-Parliamentary Islamic Cooperation in the field of Science, Technologies and Innovations – will be signed after the two-day Forum.

The Forum is organized by the Majilis of the Kazakhstan Parliament together with the ISESCO and Islamic Development Bank.