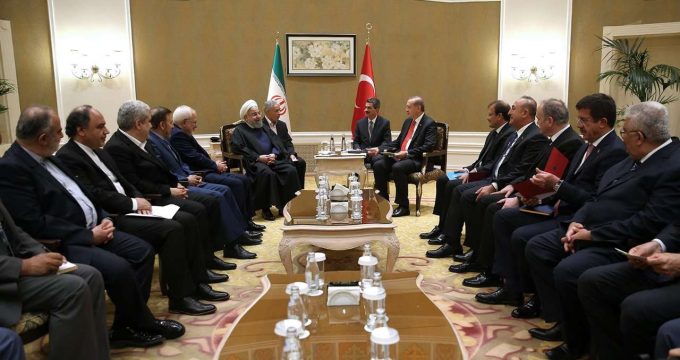 Erdogan: Conditions better than ever to expand ties with Iran

IRNA – In a meeting with the Iranian President Hassan Rouhani in Astana, Kazakhstan, the Turkish President Recep Tayyip Erdogan expressed happiness with the friendly ties between Iran and Turkey, adding the two countries have various plans to expand mutual ties.

‘The Iranian and Turkish economies are complementary to each other,’ Erdogan said, adding, ‘After the sanctions on Iran were lifted, the conditions for expanding the ties are better than ever.’

He also urged the Iranian and Turkish central banks ‘to remove the obstacles on the way of expansion of ties as soon as possible.’

He said a leap must be made in the economic relation between Iran and Turkey.

Erdogan also said that Syrian war showed that issues can be resolved not through military but through diplomatic actions, and that Syria is the cradle of civility in the region and foreign powers should not be allowed to divide up Syria.

He also stressed that the integrity of the countries should be safeguarded.

He also hoped to take some joint actions with Iran to stop violence in Myanmar.