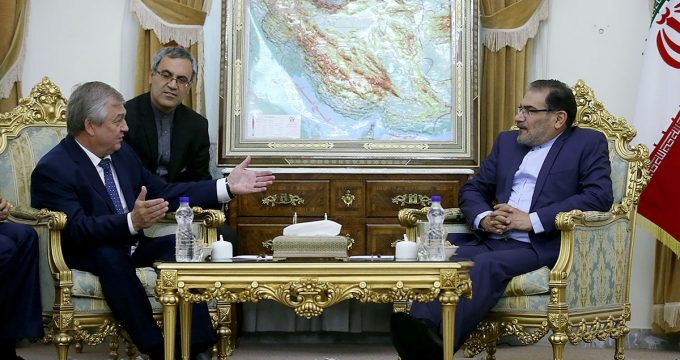 MNA – Iran’s security chief while hailing the recent Syrian army victory in strategic city of Deir Ezzor, said the valuable outcomes of cooperation among Iran, Russia, Syria and the Resistance Front is emerging on the ground and political battles against terrorism.

Ali Shamkhani made the remarks in a meeting with Russia’s special envoy on Syria, Alexander Lavrentiev, on Tuesday in Tehran, adding “terrorism crosses borders like a dangerous virus and it is not possible to be used as an instrument by only a selected number of countries. Therefore, combating terrorism must take place by adopting coordinated and non-discriminatory approaches.”

Shamkhani went on to highlight the need for respecting Syria’s sovereignty, saying the top priority of the Islamic Republic of Iran in the region is to establish stability and security and completely eliminate terrorism.

“Just as we are resolute in fighting the terrorists, we are also determined to prevent humanitarian crimes against the families of the terrorists,” Shamkhani stressed.

Alexander Lavrentiev, for his part, commended the decisive role and impact of the cooperation among Iran, Russia and Syria in the serious fight against terrorism.

“Moscow is still committed to military measures against terrorism and all groups which do not respect a political solution,” Lavrentiev said, adding “unrelenting fight with ISIL, al-Nusra and other affiliated terrorist groups will continue alongside pursuing political measures.”

The sixth round of the Astana talks on Syrian settlement with participation of Russia, Turkey, Iran as the guarantor states, as well as Syrian government representatives and the country’s opposition will take place in mid-September.