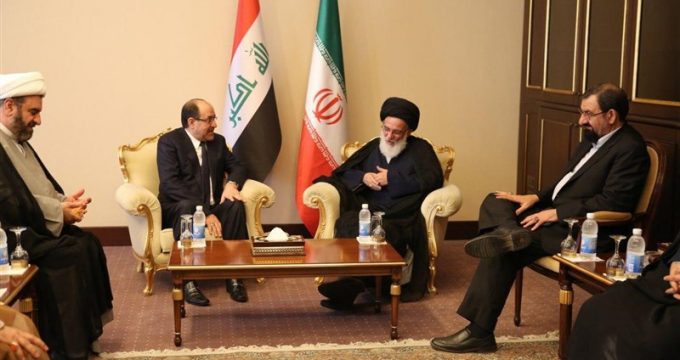 Tasnim – A senior Iranian cleric questioned US sincerity in its claim of fighting Daesh (also known as ISIS or ISIL) terrorists and said Washington is using the notorious terrorist group to curb Islamic Awakening movement and divide the Islamic World.

Speaking at a meeting with Iraqi Vice-President Nouri al-Maliki in Baghdad on Thursday, the visiting Chairman of Iran’s Expediency Council Ayatollah Mahmoud Hashemi Shahroudi said the US claims about its anti-Daesh campaign is a “sheer lie”.

He urged Muslim nations to maintain vigilance and solidarity against US conspiracies.

“The Islamic states are expected to confront Takfiri groups and US conspiracies, including ethnic and sectarian seditions,” the cleric stressed.

Also at the meeting, Iraqi vice president, for his part, thanked Iran’s constructive role in different political and economic fields in Iraq.

Pointing to the recent victories against Takfiri terrorists in Iraq, Maliki said the recent victories were achieved thanks to Ulema’s constructive role in mobilizing popular forces, solidarity among Iraqi nation and heldp by friendly countries and strategic partners, Iran in particular.

Iraqi forces succeeded to liberate Tal Afar city which was the latest Daesh base in the country following their great victory over terrorists in Mosul months ago.