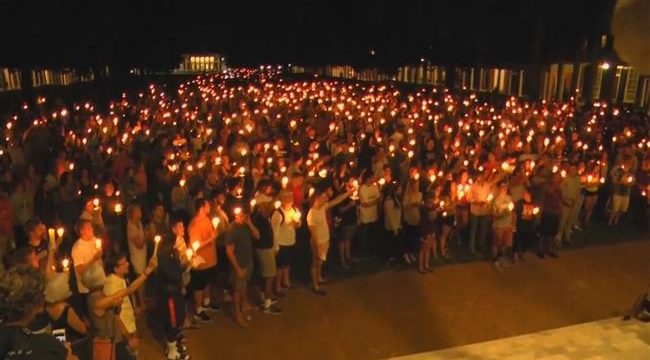 The United States is synonymous with white supremacy

Strident declamations against fascism in Chartottesville from those who supported fascists in Kiev; calls for action to be taken against extremists in America from those who’ve been supporting them in Syria. What is this if not rank hypocrisy?

While it may be tempting to dismiss 500 knuckle-dragging racists marching through Charlottesville waving Confederate flags as unrepresentative of a nation that takes pride in values of tolerance and racial equality, it would be wrong. Those who took part in those ugly scenes are the reality rather than the myth of America. They know that the American exceptionalism which Obama, while president, declared he believed in with every fiber of his being, is in truth white exceptionalism – ‘white’ in this context being not only a racial construct but also an ideological construct.

Indeed, Obama’s election as the nation’s first black president, rather than heralding the post racial society the country’s liberal establishment liked to believe, merely confirmed the extent to which the generations-long struggle for black liberation and emancipation did not end in victory but in defeat – a defeat reflected in Obama and his supporters’ embrace of the very institutions that have violated and crushed the humanity of black and brown people in the land of the free since time immemorial.

While the US Confederacy, which was the Islamic State of its time, was defeated on the battlefield, racial oppression remained the lived experience of the newly freed slaves and remains the lived experience of their descendants today. Consider for a moment the withering j’accuse delivered by Frederick Douglass, escaped slave and towering figure of the country’s abolitionist movement in the mid 19th century. In a speech he gave in 1852 to mark that year’s Fourth of July, the most sacred and revered anniversary in the US calendar, Douglass reminded his audience that “your celebration is a sham; your boasted liberty, an unholy license; your national greatness, swelling vanity; your sounds of rejoicing are empty and heartless; your denunciation of tyrants brass-fronted impudence; your shouts of liberty and equality, hollow mockery.”

While no longer held in bondage, the plight of African-Americans today – who make up a disproportionate number of victims of police violence, who make up a disproportionate number of the country’s burgeoning prison population, who are most likely to be unemployed and under-employed, most likely to be living in substandard and insecure housing conditions, and least likely to receive a college education – the harsh sentiment underpinning Douglass’s words is one his descendants would be justified in sharing with him 165 years later.

Yet even though Obama spent his two terms in the White House going out of his way to cloak the snarling beast of US exceptionalism and its white supremacist roots in the garb of democracy, he was not embraced by those who prefer their coffee white. Here it is impossible to avoid the fact that Trump’s election was in large part a reaction to Obama’s race as much as it was to his policies.

If you do not believe me then what, pray tell, is the so called alt-right, the ideological foot soldiers of Trump’s election campaign and his political base, if not a movement of unreconstructed reactionaries and racists for whom white is right and the likes of legendary Confederate army general, Nathan Bedford Forrest, is lauded as a heroic figure who epitomizes the valor and romanticism of the losing side in the US Civil War?

The veneration in which Forrest is held 150 years on is evidenced in the annual commemoration of his birthday in his home state of Tennessee, known as Nathan Bedford Forrest Day. It is also reflected in the statue of him which today sits pride of place in a park in downtown Memphis. And his is just one of the plethora of statues, monuments, and commemorations that celebrate and seek legitimize the US Confederacy across the South. These monuments and statues are, by the way, a relatively recent phenomenon, with many of them dating back to the 1960s, when they were erected as a reaction to the Black Civil Rights Movement, a movement which at the time was a threat to the racist culture that held sway, and still holds sway, in many of the former Confederate states.

In truth Nathan Bedford Forrest was a racist, murdering savage who after the war became the first Grand Wizard of the Klu Klux Klan. He fought for the ignoble cause of slavery and white supremacy, along with every other soldier of the Confederacy, and as such his statue is an insult to any conception of human decency. It is, indeed, comparable to a statue of Reinhard Heydrich or any other Nazi leader sitting pride of place in downtown Munich.

The ugly scenes that took place in Charlottesville, Virginia did so in response to a decision by the city’s authorities to remove a statue of that other famed confederate general, Robert E Lee, from a park there. Those scenes and the controversy surrounding the memorials, statues and monuments in tribute to the US Confederacy are proof that the Civil War never really ended – and certainly not in the victory for the forces of anti-slavery and racism that history would have us believe.

Ultimately, it will take more than the removal of a few statues and monuments to eradicate the cancer of white supremacy in America. It will take nothing less than the eradication of the very idea of America itself.